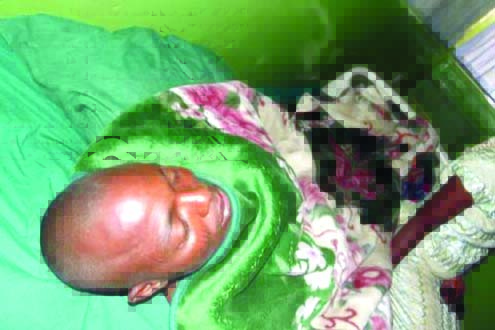 Zubairu Balogun In Hospital Before His Death

A groom identified as Zubairu Balogun, who was abducted on his wedding day in Ilorin, Kwara State, northcentral Nigeria, and held incommunicado for four days in an unknown location has been reported dead. naijagists.com

He died at a private hospital after he was severely tortured by his abductors.

It was gathered that after the deceased was rescued by a motorcyclist from the spot his abductors had abandoned him, he was taken to Temitope Hospital, Ilorin.

A source revealed that when his condition deteriorated at the hospital, he was taken to an undisclosed private healing home where he died.

Balogun was kidnapped on the day he was billed to attend the solemnisation of his wedding to his bride. The wedding ceremony had commenced the previous evening.

Confusion had gripped the Balogun Fulani compound where the deceased hailed from following his disappearance on wedding day, particularly when calls to his mobile phone were not answered.

His younger brother, Kehinde said he wasn’t informed about his kidnap. (PMNews)