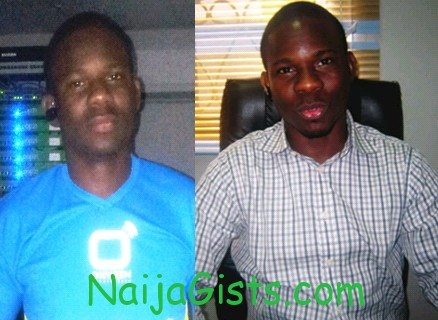 The life story of Mr Wande Adalemo has become an inspiration to all for us. It teaches us that with determination and persistence, we can all achieve our desired goals in life. naijagists.com

Wande Adalemo dropped out of Olabisi Onabanjo University in Ago Iwoye, Ogun State Nigeria to actualise his dream of building an Internet Service company which is now worth over N1 Billion Naira.

He is the CEO and the co-founder of Oxygen Broadband Networks, the first metro WiFi network in Nigeria.

The aspiring graduate dropped out of school in 1998 to start the company.

As at today, the company is worth over N1bn. The company has just rolled out a new WiFi network at Computer village in Lagos State Nigeria.

He said his greatest challenge was funding, but the driving force had been the passion to ensure that all Nigerians have access to affordable Internet access through WiFi technology.

From the ground zero in 2005, dropping out of school along the line, Adalemo said he overcome the challenge and was able to attract investors, who believed in his dream and invested in the business.

Adalemo said the company started with a $2m investment and as at today, had invested N1bn with a network infrastructure already in place and duly licensed by the Nigerian Communications Commission.

“As we speak, we are currently at the Computer Village in Lagos, where we have our pilot network. In the last two months since we started, we have had over 20,000 connections sitting on our network,” he said

In view of this, he said the company had laid out an expansion plan, which would see it invest another N200m in rolling out services in six locations across Lagos State before the end of 2012.

“We are doing another N200m investment and we are going to six new locations by December 2012. We are partnering with malls on the Island, Surulere, and high traffic restaurants. We already have agreements with all of these people,” he said.

The expansion, Adalemo said, would see Oxygen Networks expand to 20 locations in March 2013, and 100 locations in Lagos by 2015; and then Abuja, Port Harcourt and Kano, thereafter.

“Of the N200m needed to roll out services by December 2012, we have attained N75m equity investment to date, which means that we are really set to move to these new locations,” he said.

According to him, the company currently operates with 100 per cent private equity fund from the board of directors and “they are putting in more funds to see us expand.”

He said the company had already attracted institutional investors such as Google and Main One Cable Company, which were interested in investing in it and help boost broadband access in the country.

While the start-up appears to be on the right track, the Oxygen Broadband Network boss said the beginning was very rough.

In an interview with our correspondent on how it all started, he said, “I never saw a computer until 1998. I was with my cousin Femi Adalemo, who was the Chairman of the Nigerian Internet Exchange Committee at some points. So, I went to his office and he said he wanted to send a mail to someone in the United States. Five minutes after, the person in the US had responded to the mail and that surprised me.

“I couldn’t sleep that night, and in the morning, I went back to him and asked him to teach me how to develop something that will make Nigerians send and receive e-mails easily. I told him I wanted to do something that would make it easier for every Nigerian to send email.

“He told me it was networking and that was how it started. So, as I grew in my knowledge of what the Internet access and broadband were, it became more of a passion. Getting the technology was one thing, putting it together was another, and getting funding took a while. Between 2005 and now, you can see it has been seven years, it has not been easy.”

“I had to trek from Iponrin to Ajose Adeogun to meet him. He was the managing director of a bank then. Meanwhile, I had met several potential investors who had discouraged me but I did not give up. So, when I got there, he told me; ‘If you cannot convince me in two minutes, I cannot invest in this because an idea that cannot hit someone in two minutes is no good idea.’ Well, I think I was able to hit him in two minutes and the next question he asked was how do we move?

“The first thing we did was to go around the world to see where WiMax was failing because my own idea was that WiMax will not work but WiFi will. So how do we get WiFi to work? And from there, he got some of his friends involved in the business.”

Adalemo reiterated that the company would continue to expand because he believed WiFi technology would play a major role in boosting Internet access in Nigeria.

He said, “Because we believe that everybody should be on the Internet and we are restricted by regulations as to how to expand (we cannot cover wide area), we decided to take the Internet to where everybody is going?

“Oxygen believes that your Internet should be wherever you are going and instead of carrying your modem or dongle around, if you know that Oxygen is present at the place you are going to such as the cinema, restaurant, clubs and malls, among others; then, it becomes a better option for you.”

According to him, the second phase of the company’s expansion will be the ASPANDA Market at the Lagos International Trade Fair Complex, Alaba and Oke Arin markets.

He disclosed that the company had sealed a partnership with the Nigeria Inter-Bank Settlement System Plc to provide its WiFi network for PoS connectivity at the Computer Village, adding that this was the driving force behind its planned extension into the Oke Arin Market.

“Due to our partnership with NIBSS, we are providing WiFi for the purpose of PoS terminals alone at Oke Arin Market. These are some of the plans that Google is excited about,” he said

Adalemo encouraged young Nigerian entrepreneurs not to be deterred by challenges surrounding them, while assuring them of success if they remained focused.

He said this was what made him drop out of school when he found out that academic works were disturbing his entrepreneurial drive.

“I will say that I am also a proud school dropout because at some point, I realised that pursuing academic excellence was interfering with my passion for this dream. May be Oxygen would have become a dream earlier but for exams in school,” he said

When our correspondent took him up on this, he said, “I am not saying it is good to drop out of school, but I am saying it is good to think outside the box. The emphasis on paper qualification in our society has not helped us. If school will limit you as an entrepreneur, get out; and if it will enhance you, stay with it.”

“I encourage people to go to school, but once you find that dream, that passion that you can pursue and it is a good idea, you will succeed. Once you are dedicated, you will get there. It is not about everyone leaving school, it is about understanding what will work for you.” (PUNCH)