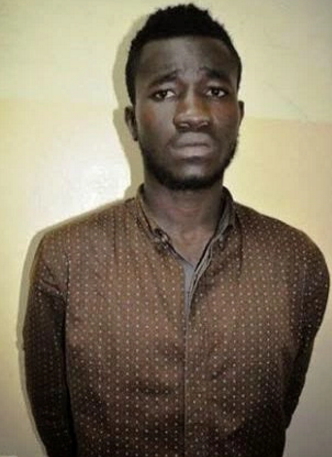 The police in Lagos state have arraigned a final year student of the Nnamdi Azikiwe University (NAU), identified as Ebuka Orumba over allegation of forgery, stealing and fraudulently hacking of bank accounts.

Orumba, a 400 level Computer Engineering student was arraigned at an Ikeja magistrate’s court alongside a tricycle rider, one Ator Kalu, for allegedly diverting the sum of N8million from a law firm bank account.
According to the police, the accused belong to a 3-man syndicate allegedly led by a 400 level Environmental Science undergraduate student of NAU identified as Patrick Nwafor who is now at large.

The suspects who were charged by policemen attached to the Special Anti -Robbery Squad Ikeja, on a five count charge bordering on forgery, stealing and fraud however said they were lured into the crime by Nwofor.

Narrating their roles, Orumba in his confessional statement to the police said: “Nwofor and I are friends in school. He sold the idea to me and he told me to recruit Ator.
“Nwofor is the brain behind the hacking. I acted as a facilitator. I don’t know much about the hacking stuff.”

On the other hand, Kalu the tricycle rider revealed that he needed money to solve some pressing needs. “I know Orumba from Anambra. We are childhood friends from the same village. One fateful day,I had issue with my tricycle and I needed money to fix it.

“I went to Orumba to help me with money but he told me that he can give me a job to help me with my problem. Orumba took me to the licensing office at Ojudu Berger, where he helped me to obtain a fake driver’s licence with the name Engineer Asukwo John Okoro.

“I went to the bank at Mushin to check but when I asked the branch manager, he told me that N3million was in the account. I screamed as I had never expected such huge amount. I was trying to inform Orumba about the money but the bank manager told me that network was slow and I could not withdraw the money.

He told me to wait a while but to my shock, the branch manager was suspicious and he handed me over to the security in the bank. I was arrested and our gang was exposed.”

According to police investigation, the gang allegedly hacked into the account of the law firm Simmonscooper partners and diverted N8million which they moved into three different accounts with fake identities and documents.