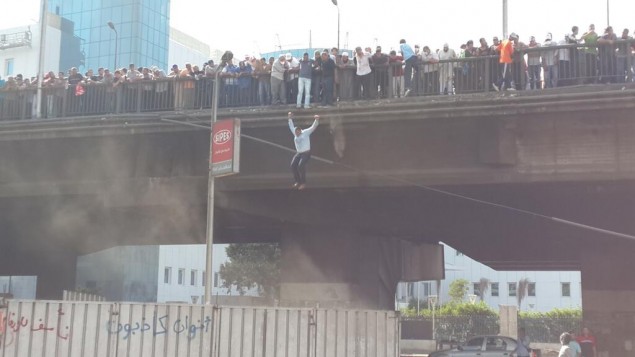 Oct 24, 2015 – Tragedy As Hausa Man Jumped To His Death From Obalende Bridge While Running From Taskforce Officials

An unidentified Hausa Youth jumped over the Obalende Bridge, Lagos, on Thursday at about 6:30pm and died instantly, on sighting operatives of the Lagos State Taskforce on Environmental Sanitation and Special Offences, thinking that they were after him.

PM reports that, Taskforce Officials stormed Obalende to enforce the law on Environmental Sanitation when the incident occurred.

A trader who identified himself simply as John said the deceased from Adamawa State, North East Nigeria, was watching the Taskforce Officials from atop the bridge as they were dislodging street traders and illegal motorcycle operators under the bridge beside the Oando Filling Station when he suddenly sighted another Taskforce Officials’ patrol van in the opposite direction.

The trader said, thinking that the Taskforce Officials would arrest him, the deceased in a bid to escape jumped over the bridge and landed on top of the iron beautification barriers under the bridge.
He sustained serious injuries on his head and other parts of his body and died instantly.

The trader stated that immediately the incident occurred a mob attacked the Taskforce officials, vandalized their vehicle and pursued them towards the 3rd Mainland Bridge.

The witness said the Taskforce Officials were able to escape the irate mobs by shooting in the air to scare them away.