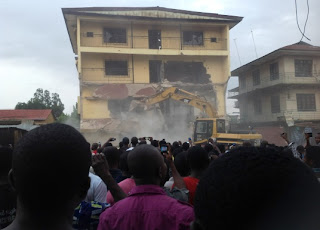 Few days ago, NaijaGists.com exclusively shared with you the story of an hotel located in Onitsha Anambra state Nigeria where they sell cooked human parts as meat, if you missed the story, read it here.

The name of the hotel has been revealed and it’s called Upper Class Hotel.

The exact address of the hotel is number 8 Old Market rd in Onitsha.

The owner of the hotel is a popular Onitsha big boy and his name is Bonaventure Mokwe.

Earlier this week, police arrests 10 people including Mr Mokwe following a tip off from vigilant residents and a pastor who unknowingly ate human meat in the hotel earlier this year.

A Pastor who was among the people who tipped off the police on Thursday said: I went to the hotel early this year, after eating, I was told that a lump of meat was being sold at N700, I was surprised. So I did not know it was human meat that I ate at such expensive price.”

Head of a man and a woman were discovered by police along with AK47 rifles and magazines.

The wife of Upper Class hotel‘s owner, an Onitsha-based lawyer, Mrs Nkiru Mokwe claims her hubby was set up by those who want his property taken.

Mrs Mokwe said the human heads were planted there by those who seek to destroy her husband’s fortune.

“My husband is being detained in a very dehumanising condition at SARS, Awkuzu, and the police have denied him access to his lawyer and relations.” She said “My husband’s hotel at No 8, Old Market Road, Onitsha which he inherited from his father, Chief G.C Mokwe, has been demolished”

She has appealed to the federal government of Nigeria to intervene on her husband’s behalf.

Mrs Nkiru Mokwe also said her husband escaped an assassination attempt in 2009 and that this plot is the final plan to kill him.