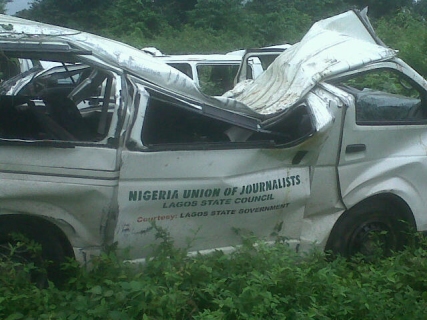 According to eyewitnesses from the scene of the tragic accident that killed 3 Nigerian journalists on their way back from a meeting on Friday, the victims who died didn’t have any seat belt on.

Some of them died after they were ejected from the vehicle that somersaulted about 4 times before crashing into a bush.

We also learnt the accident vehicle was overloaded with officials. 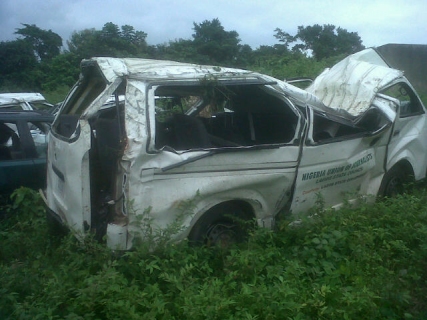 The Nigerian Union of Journalists (NUJ) officials from Oyo and Lagos State councils were last Friday involved in a fatal auto crash which claimed the lives of Adolphus Okonkwo of the Voice of Nigeria, Kafayat Odunsi of the Nigeria Television Authority (NTA) Tejuosho, Lagos and the chairman of the Radio Nigeria, Ibadan Network Centre of the NUJ, Tunde Oluwanike.

According to an account by one of the survivors, the accident occurred at 6.00pm at Osu junction near Ilesa, Osun State, when the rear tyre of the vehicle conveying them burst, thus making the vehicle to somersault about four times before it finally crashed in the bush. Mr Gbenga Opadotun who spoke on hospital bed said, “We were coming from Abuja where we held a meeting and by the time our vehicle got to Osu area, the rear tyre of our bus burst and the vehicle veered off the road before we somersaulted about eight to nine times and finally crashed into the bush.”

Meanwhile, one of the survivors of the accident who was in critical condition, Mr. Sylva Okereke has been evacuated to the Lagos University Teaching Hospital (LUTH) for proper medical attention, while two others were evacuated to Ibadan, Oyo state capital, for further treatment.

Many Nigerians have continued to troop to the LAUTECH Teaching hospital where the victims of the auto crash are receiving treatment.

Some of the early callers at the hospital included the state Deputy Governor, Mrs. Grace Tomori, the state Commissioner for Information and Strategy, Mr Sunday Akere, Special Adviser to the Governor on Security, Mr Adekunle Amos and the President, Nigerian Guild of Editors (NGE), Mr. Femi Adesina, who conveyed the message of his association to the victims.