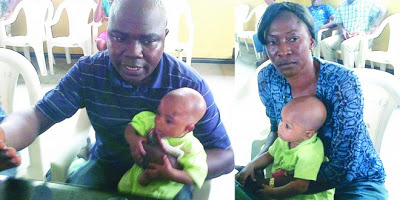 A Nigerian couple based in the US has been arrested for allegedly stealing twin babies from Nigeria.

The alleged baby-thieves were arrested on the 15th of April, 2013 after they were reported to the American Consulate.

The couple got busted when they went to the US embassy in Lagos to secure visa for their supposed twin babies.

On suspicion of baby theft, the American embassy in Lagos deferred their visa application and ordered a DNA test.

“The Consulate invited them when it received the result of the DNA, which revealed that the babies do not belong to the couple as both lack appropriate genetic marks.

“During investigations, detectives travelled to Port Harcourt, Rivers State where the woman claimed she gave birth to the twins in a private small house. On getting to Port Harcourt, the woman claimed she could no longer identify the place; she also stated that she had no antenatal record anywhere as she did not attend any.
“She stated further that the total sum of N1.8million was paid to the woman who administered “Agbo” local herbs on her that eventually produced the babies. Soyibo, the claimed father of the twins, stated that he was also given “Agbo” that boosted his sperm count that produced the babies. Both suspects claimed they can no longer trace the woman whom they paid the N1.8million for the “Agbo” and the delivery of the baby. They also could not produce anyone who knew about the conception and the subsequent delivery of the babies”.

Mr Soyibo, a US citizen who works as a taxi driver and his wife were childless for 15 years before this sudden move.

Read their confessions below

“We visited her in November 2011 when I came into the country because the woman insisted on seeing my wife and I. When we got there, she gave us some native medicine (Agbo), which was to help us in our quest to get a child. I was in the country until around April 2012. As at that time my wife was already pregnant.”

He stated further: “On November 24, 2012, my wife was delivered of the twins in Port Harcourt. I was in the country but I did not go with her. I came in on November 19 but was too tired and was also busy with some other things. I was surprised when I went to the Embassy to process their visa to take them with me back to the US and we were asked to go for a DNA to ascertain if we are their biological parents. I could not believe it when the result came out and we were told that the babies are not ours. I know my wife got pregnant, so I do not understand what they mean.”

When asked if any other person apart from his wife was around when the babies were delivered, he said “no”, adding that it was only his wife and the woman that gave them the native medicine.

He said a relative of theirs accompanied his wife on that journey, but was not allowed into the house.
On why his wife could not recognise the house, where she claimed to have been delivered of her babies when detectives took her to Port Harcourt, the man said it was because they got there at night.

This is a serious case.

Continue Reading
You may also like...
Related Topics:American, babies, couples, nigerian, steal, twins, us based