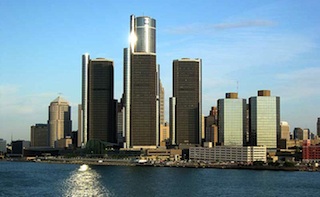 July 19, 2013 – US City Of Detroit, Michigan Files For Bankruptcy Protection Over $18.5 Billion Debt

The most populous city in the United States of America, Detroit has filed for the largest bankruptcy in history.

According to court documents, the city of Detroit in Michigan just filed a bankruptcy protection over a whopping $18.5 Billion debt.

Due to the highest number of crime, the population of Detroit has reduced to 685,000 as at today.

“The citizens of Detroit need and deserve a clear road out of the cycle of ever-decreasing services. The only feasible path to a stable and solid Detroit is to file for bankruptcy protection.” – Michigan Governor Rick Snyder said in a letter accompanying the court filing.

In June, the city stopped making default payment on some of it’s 18.5 billion dollar debts & obligations.

Snyder appointed an emergency manager with a background in bankruptcy earlier this year to restructure Detroit’s finances.

He said he had “very much hoped” the move would help the city avoid bankruptcy, but that now it is time to “face the fact that the City cannot and is not paying its debts as they become due and is insolvent.”

Michigan Governor Synder has listed a lost of problems that prove that the Detroit city can’t meet its obligations to citizens either.

The homicide rate is the highest in nearly 40 years, and, for more than two decades, Detroit has been on the list of the most dangerous cities in the United States.

People have to wait an average of 58 minutes for the police to respond to their calls, compared with an average of 11 minutes nationwide.

A lack of funds for maintenance and repairs means only a third of the city’s ambulances work and police cars and fire trucks are also in poor condition.

There are 78,000 abandoned buildings scattered across the city, and 40 percent of the streetlights don’t work.