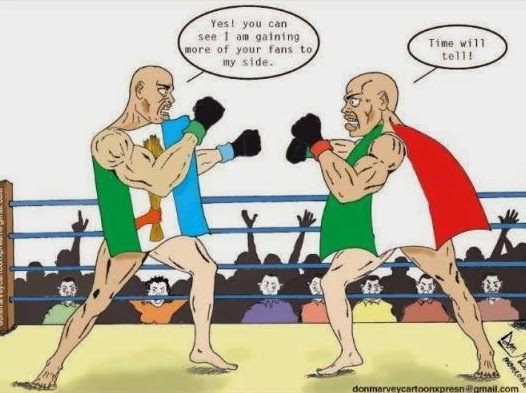 I’ve watched with keen interest the intensity of our political tussles as we approach the election day. You will agree with certainty the fear that elopes in your mind about the events that will happen that day.

I’ve been doing my home work, discussing with members of youth groups, women groups and political organizations that are having one reason or more to be part of the electioneering process. I’d be frank; those who are backing the APC change movement have being making the loudest noise and making the biggest threats. I really don’t know where the PDP bands are heading but they seem to be playing a different game all together.

Recent polls from whatsoever media trying to offer opinions on how Nigerians will vote in St. Valentine’s Day elections have being marred with controversies. Reports of websites being tapped into and polls skewed towards one candidate over the other has being rife. On each side of the dual party political divide, each seems determined to prove beyond doubts why they are the ones to beat.

I am not too certain the effects of our online polls on voting pattern. Some person may have to do a research on that. Only a few thousands often take part in these polls. With over 100million people expected to vote and about 80% in rural Nigeria where there is hardly any broadband penetration, those depending on the internet as an assurance of the extent of their popularity may be getting it all wrong. I may agree though that these polls are morale boosters.

After having to listen to so many people argue out their case on the two currently available lines of thought, I was overwhelmed by the extent of tactical discipline each side is showing on their strategies. PDP believes door to door works, while APC thinks shouting at the top of their voice and waving the brooms everywhere works. I was actually amazed at the demeanor persons on each side carry, PDP calm and easy going, APC tenacious and resilient.

The goal on either side of the divide is to win the elections. Whatever way that is achieved isn’t a matter of discuss, what matters is the goal. I’ve stumbled on people who said they had a head with their boss at work over who they were supporting. In short, their bosses wouldn’t tolerate the sight of party emblems they aren’t supporting at their premises. Along family lines and even friendship lines, the division is thickening as individual persons decide on which bandwagon they would trod. It is remarkable to note too that even in the army where the protection of our national integrity is focus, generals are deciding on party lines.

Everyone’s saying February 14 will be bloody. I’m amazed at the expected turn of events on such a day known for its love fanfare. Threats are ranting the air from every corner of divisions and war if presidential candidates on both sides of the divide don’t win. One may wonder what hope remains for those, the majority of Nigerians who may not be able to help themselves with weapons.

Many persons have told me they won’t be voting as they fear what may result. They’d rather remain in their homes. The reason for this is the “at all cost” winning approaches the politicians are applying and planning to apply. When I hear statements like “make sure you deliver” or “we will deliver,” I am amazed at the certainty and assurances that follow those words. Nigerians are aware what it means “to deliver.”

Seriously, the level of politicking has reached an all time high. An acquaintance received a text from her youth organization asking for her name and her PVC number while another said persons were offering to buy his PVC for a token sum of N10000. The question one may ask is “for what purpose?” Off course, the answer isn’t far fetched, to rig the elections and to silence the peoples voice. Every vote out of will is a voice for change silenced.

The reasons politicians are giving for Nigerians to support them are absurd. Many are not even aware their party has ideologies or do they even have their own manifestos. They are too busy throwing stones at the moment and Nigerians are too busy enjoying the fanfare that results for them to even bother. Graphics artists must be having splendid times drawing cartoons after cartoons of amusing electioneering scenes. The issues that Nigerians so desire of these men to talk about are left aside while we are overwhelmed with political “lafftacus.”

While Nigerians talk so much about change, well thinking Nigerians must be deeply concerned about the kind of change we need. Here again I noticed that what most Nigerians think is change is having a different person on seat but not necessarily a different mentality. Nigerians are so lackadaisical in asking what’s on the offering. On the two divides, those who are supporting the incumbent PDP are of the opinion that “there is change ongoing and Nigerians cannot ask for better” and those who are on the APC divide are saying “change never existed, put us in and see change.” On both sides, there are biased viewpoints.

What I’ve observed is the absurd naive thinking pattern that characterizes most Nigerians who are expected to vote. They easily believe lies and come to faulty conclusions about their choice of candidates. On each side, supporters carry bias pictures of opposition aspirants whether incumbent or aspiring and pass same on through propaganda machines. These distorted images are what sell the most in our political atmosphere.

Aspirants have being making damning campaign speeches. Religion has being a major weapon and its seriously being used. Nigerians are gladly waiting to hear what one pastor or prophet has to say about one political candidate or the other. Some pastors have even being dragged into the train as reports of pastors sharing election money thrives. I hear a certain big church almost divided as a result of sentimental political alienation.

The rhythm of play is certainly intense. Whatever style that elopes from the passion with which both sides are showing, it is to ensure some person sings the victory song. My fear though is the same fear a lot of Nigerians have about our falling into the same old trap whoever wins. The reason for this fear is because both sides of the divide haven’t done enough to prove they are totally apart in ideology. The political contenders are still being surrounded by selfish and greedy persons or cabals who will still slow down or bar any good thought that the contenders may have. Nigerians must vote anyway not necessarily because the best candidates are in the offering.

What Nigerians need now is who to tackle the problems we are having now, the issues that have continued to go unnoticed by our political stalwarts. What different strategy will come to play? What substitutions will be made to ensure Nigerians win? The truth is that in this tactical display between these two political giants, the winners should be Nigeria and Nigerians alone. Anything less, Nigerians must take positions as referee and offer their red card.