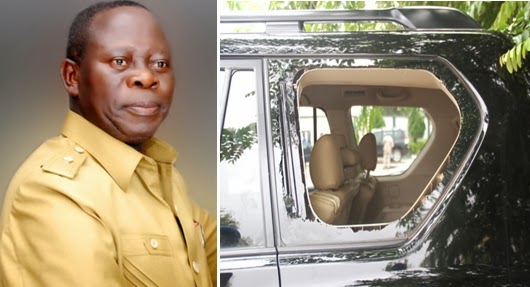 The governor of Edo State Nigeria narrowly escaped a brutal attack at a conference that ended up in confusion today in Benin City.

The meeting the Presidential Advisory Committee on National Dialogue had with stakeholders in the capital city of Edo state today ended up in disaster after outburst from some participants against a comment made by the governor.

According to sources on ground, Governor Oshiomhole was immediately whisked away from the venue by his security details when the situation became unbearable.

The Presidential Advisory Committee on National Dialogue has apologized to Governor Adams Oshiomhole of the southern Nigerian state of Edo over the unruly behavior of one its members, Col Tony Nyiam (rtd) who led some participants at the conference held in Benin City, Monday, to shout down the Governor when he was making his presentation.

In a letter signed by Chairman of the Committee, Senator Femi Okurounmu, and entitled “Dialogue Committee condemns unruly Behaviour” it said: the Presidential Advisory Committee on National Dialogue wants to put it on record that we noted the sad incident at today’s (Monday’s) Interactive Session with Nigerians from the South South held in Benin City, Edo State.

“The Committee wishes to state its unequivocal commitment and that of its members to the principles of democratic discourse. Although we take special exception to the unruly conduct of one of our members who joined the crowd in shouting down the Comrade Governor of Edo State, Adams Aliyu Oshiomhole, while he was giving his remarks, the session continued and ended peacefully.”

The Committee continued in the letter dated October 28, 2013 “we want to emphasize that the Committee will listen to all shades of opinions in the areas of its mandates and will not henceforth condone the kind of unacceptable behavior we witnessed in Benin City.

“The Committee wishes to express its sincere appreciation to the Government and people of Edo State for providing support to the Committee in its assignment in the state.”