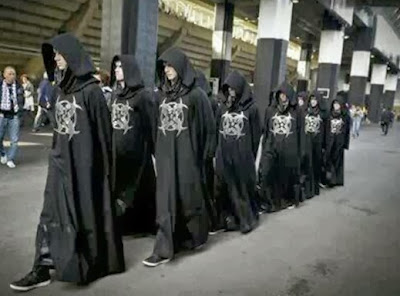 Yes you might have come across this story somewhere else but am here to shed more light on this strange end time happenings.

This past weekend, 11 scary-looking men were spotted at Chelsea‘s Stamford Bridge.

The 11 strange looking men dressed in satanic robes stormed the Premier League clash with Manchester City on Sunday the 27th of October, 2013.

A closer look at these alleged satanists brought to memory the men spotted on Saturday’s match between Bayern Munich and Hertha Berlin at the Allianz Arena.

According to sources, the 11 satanists were dressed in black satanic robes with satanic symbols on their chests and hoods. Eyewitnesses claim they were making synchronized moments at irregular intervals during Chelsea’s 2-1 win, while they also stood in unison at random moments.

Situated three rows back from the corner flag at the Shed End, the gang could be clearly seen on TV cameras beaming pictures of the crunch fixture all across the world.

One Chelsea fan sat close to the mysterious guests was Robin Taylor, who said afterwards that he was slightly perturbed by their presence.

“We’re used to a few different characters down at Chelsea, there was once even a guy brushing his teeth behind the bench at a game, but we’ve had nothing quite like this before,”

“It was very weird. They sat very still for a long time but then would hold their hands up together, or stand up in unison and then sit down again. Everyone near me was very confused. Some people laughed, some looked astonished. It was just very weird.” – He said

As earlier stated, the 11 satanists also made surprise visit to Stamford Bridge of Franz Beckenbauer, the former Germany World Cup-winning captain and coach.

According to sources, these sightings of mysterious satanic symbols and satanists coming boldly to show people who they are happened in London, New York, Rio De Janeiro and other locations across the world.

Speculation over the events has hit social media, with discussions using the hashtag witnessed at the sightings: #WINNERTAKESEARTH

Check out more photos of the 11 satanists and many other satanic symbols spotted in different locations across the world below: 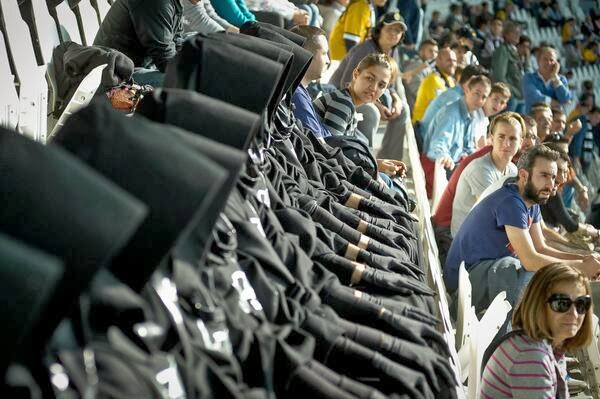 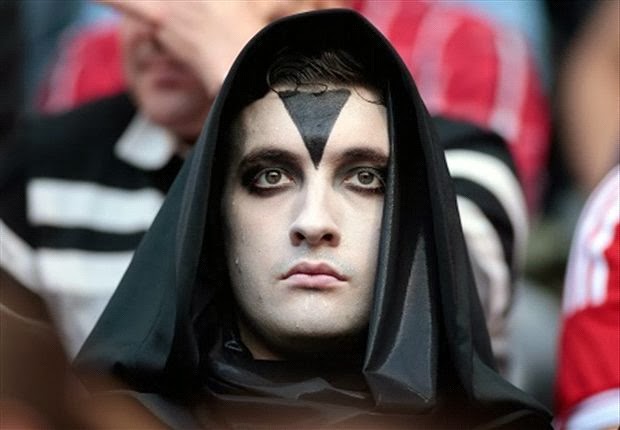 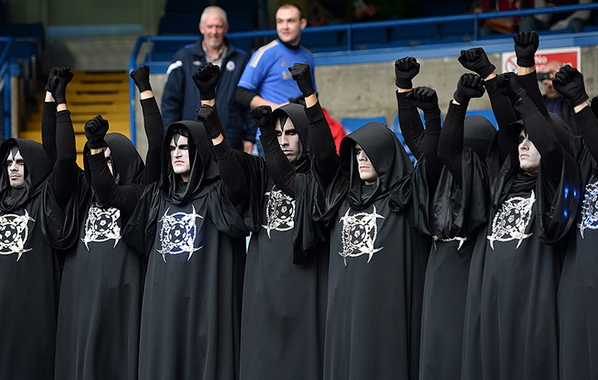 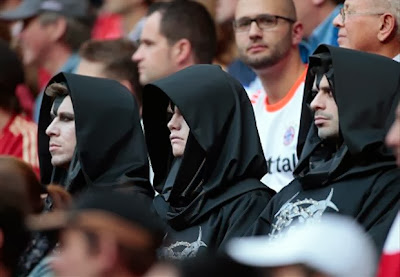 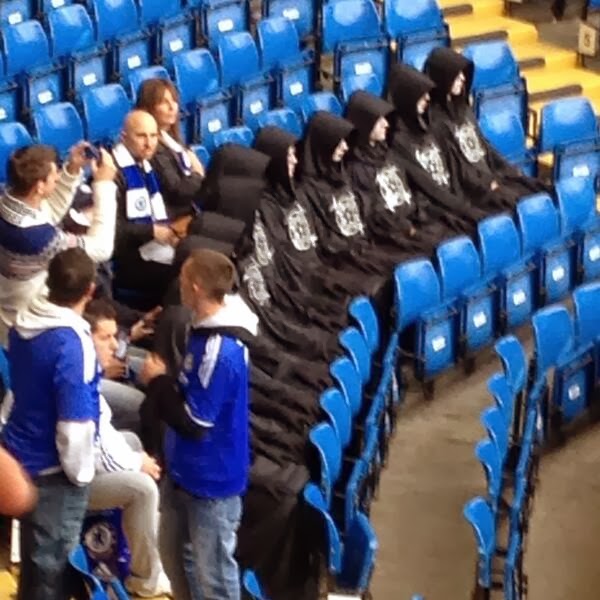 In another end time move of satan and his agents, several illuminated figures were projected over Sugarloaf mountain in Brazil and 11 men in satanic robes have been seen in London and Italy.

The whole thing started with a bizarre illuminated bio hazard sign in 2 different parts of the world and #TheWinnerTakesEarth sign in Brazil. 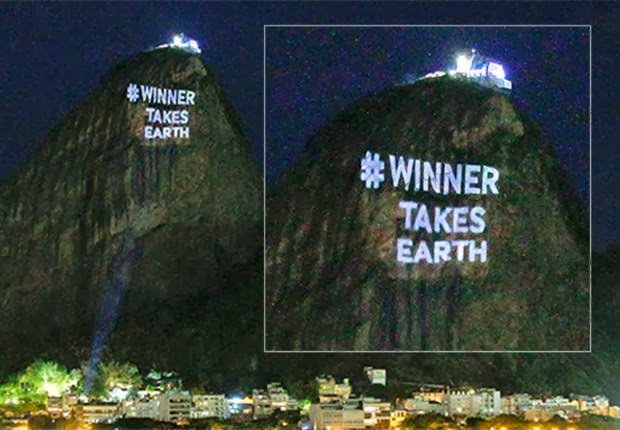 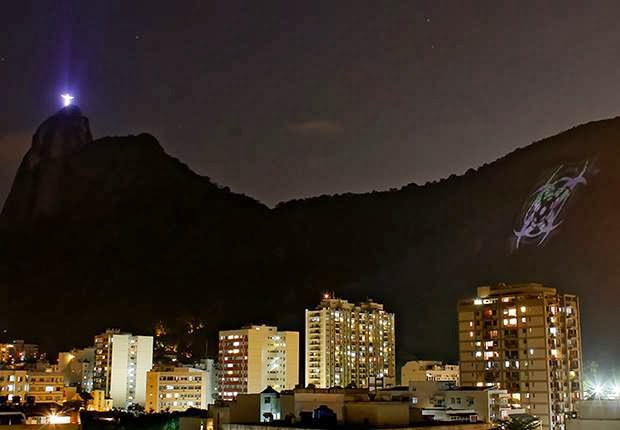 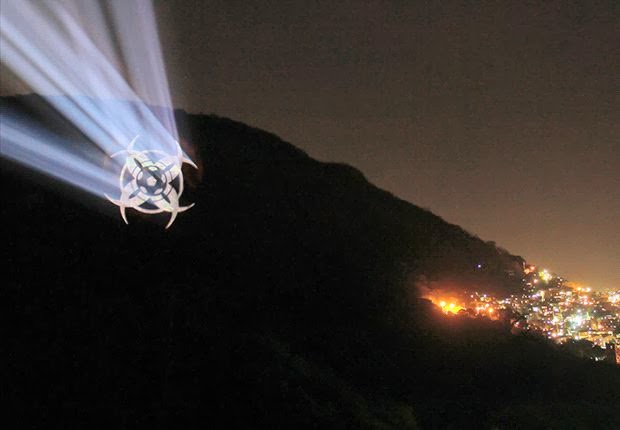 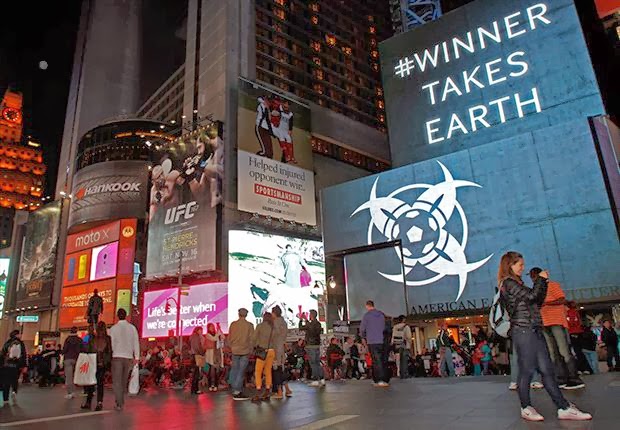 Satanic symbols spotted on a football field in London England. 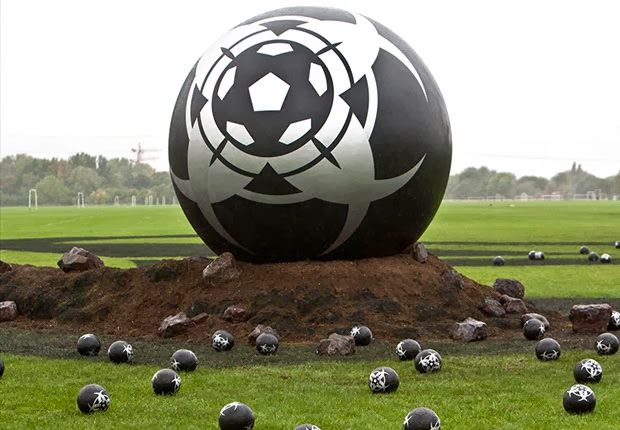 Without doubt, these are signs of end time that every believers must be aware of.

Satans and his agents are working behind the scene to carry out their end time mission.