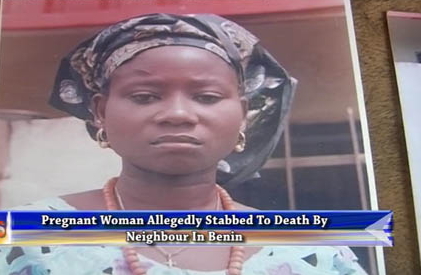 All hell broke loose in Benin city Edo state over the weekend after a neigbhour attacked a 6month-old pregnant woman who went to demand for the money she loaned her.

The victim identified as Mrs Ikhuoria was stabbed to death on Saturday by one Mama Emmanuel who refused to pay back the N1000 she borrowed.

Watch a video report of the horrific story by ITV below

“I was working at the back of the house when I heard noise. I rushed the victim to a private hospital when I saw the way she was bleeding. Doctor said it was an internal bleeding and I should take her away so I called the husband to come.”

“My wife borrowed the attacker N1,000 and when she demanded for the money, Mama Emmanuel stabbed her. She killed my wife. My wife was six months pregnant. She died on Monday morning.”