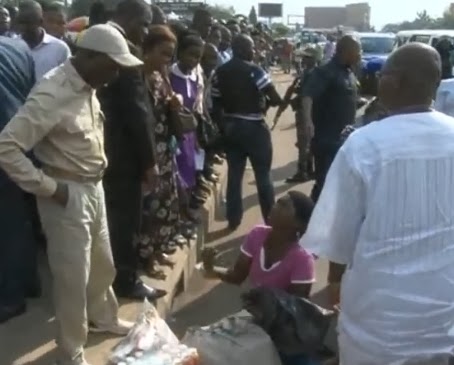 This is a real life story that happened in Benin city, Edo state, Nigeria.

Governor Adams recently caught a woman who disobeyed the sanitation rule for illegal hawking on the road.

When the poor woman was caught, she knelt down infront of Governor Oshiomhole pleading and crying for mercy to avoid losing her only means of livelihood.

Moments later and to everyone’s surprise, Governor Adams Oshiomhole was spotted venting angrily on the poor woman calling her all sorts of names.

The most heartbreaking statement he made was “You are a widow, go and die” as the woman continued to cry non-stop to find favour in his sight.

What could have caused him to reply in such a manner?

Since the video surfaced yesterday, the Governor of Edo State has been tagged by many as a angry and merciless man.

What a cruel and oppressive statement!

For the record, Governor Adams Oshiomhole is a widower.

He lost his wife, Mrs Clara Oshiomhole to breast cancer in December 2010. She died at a clinic in Abuja at age 53.