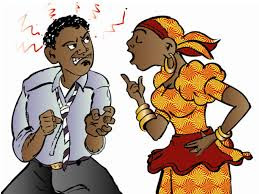 A young man identified as Paul Uduozor has been jailed for allegedly blinding his wife after a violent assault.

The incident happened at the couple’s home at #6 Oloro Street in Abaranje area of Ikotun earlier this week.

On night of the assault, Paul allegedly gave his wife, Faith Uduozor several blows and some landed on her eyes which caused permanent damage to the eyes.

A neighbour reported the matter to Ikotun Police station and Paul was arrested and charged with causing permanent defect to Faith’s eyes.

Few months ago, the victim was battered to a point of coma and was revived at the hospital.

The couple’s neighbours said that Uduozor and Faith were always fighting until the latest fight that resulted in her blindness.