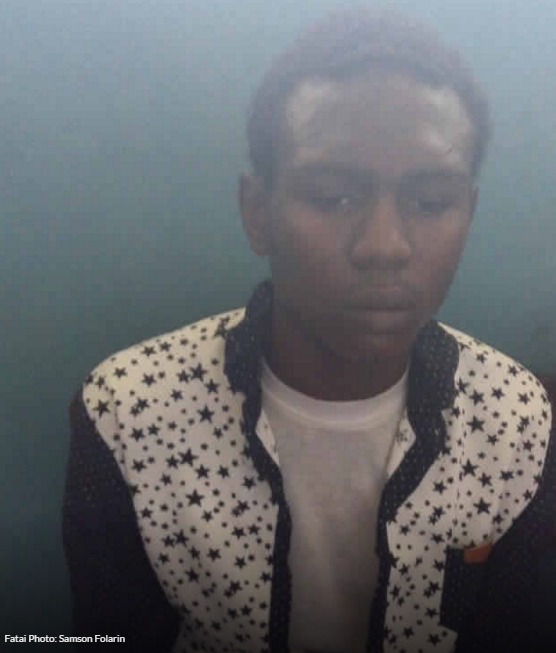 19-year-old vulcaniser Fatai Sabitu who was alleged to have killed his friend, Yusuf Sheu, says he punched him only once.

Sabitu, who hails from Abeokuta, Ogun State, explained that after the 38-year-old slumped, he rushed him to two different hospitals before he died.

We had reported that Sabitu and Sheu, who both lived on Raji Fashola Road, in the Imude-Shibiri area of Ojo, Otto Awori Local Council Development Area of Lagos, had fought over a stolen phone.

Our correspondent reported that Sheu, a Kwara State indigene, bought a phone from the suspect, which was later discovered to have been stolen.

After the real owner took back his phone, the deceased was said to have demanded a refund of his money, which led to a fight.

The deceased was said to have slumped during the fight and was confirmed dead in a hospital.

The matter was reported at the Ilemba Hausa Police Division, and the suspect was arrested.

It was learnt that while Sheu’s remains were deposited in a mortuary, the matter was transferred to the State Department of Criminal Investigation, Yaba.

The suspect was said to have confessed to police detectives that he killed the victim, adding that he acted in self-defence.

Sabitu, a primary school dropout, told our correspondent that he was a victim of bad companionship.

He claimed that Sheu was the one who stole the phone, adding that after the owner found it and collected it back, the deceased attacked him.

He said the deceased believed that he was the one who exposed him.

He said, “We have known each other for about three years now. I am a vulcaniser, and he worked in a hotel. We lived within the same community. He used to drink a lot and he introduced me to a lot of bad things, like the tattoo in my arm.

“He had stolen a woman’s phone and I saw him when he took it, but I didn’t say anything. He went and used the phone to borrow money from one of his friends in the area.

“The owner of the phone, who had been looking for it, later saw it in the man’s hand and picked a fight. The man then explained how he came about the phone.

“The owner of the phone took it back, and Sheu was ordered to return the money he borrowed from the man.

“He was angry and thought I was the one that exposed him. He came to meet me where I was and started punching me; I had to fight back. I only gave him a punch before he slumped to the ground.”

Sabitu said he took Sheu to a private hospital, where he was rejected.

He added that the victim was finally admitted in another hospital, while he left to narrate the incident to his (Sheu) family and bring them to the hospital.

The suspect said when they returned to the hospital, they could not find him and the hospital management told them some people had taken him away.

“After searching several hospitals in vain, I decided to return home. I saw his dead body in front of our house and some people started beating me. They drove the police away and were about lynching me when the Baale (community leader) came and drove them away. He took me to the police station.

“My life is ruined because I made him my friend. It was just a blow that I gave him,” he added.