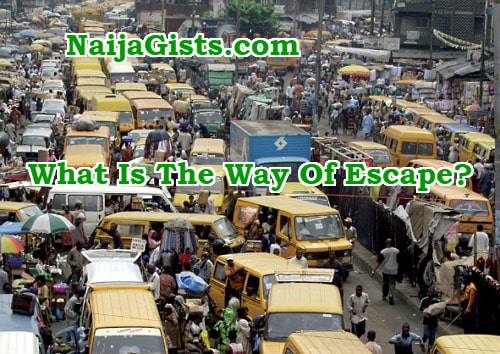 The Atmosphere In Nigeria Has Become Toxic. Life Has Become Cheap & Meaningless. What Is The Way Of Escape?

The situation in the country has become so intense and dark that there is the tendency for one to lose hope and fall into despair. Those who promised liberation have turned out to be the same if not worse than those they claimed to have liberated us from. Our situation has become so dire that like those who clamoured for independence from colonial power, the independence they fought valiantly and almost lost their lives for has turned out to be so harsh that they wished the colonial masters could be invited to return and continue where they stopped.

The Biblical equivalent of today happened in Israel when Rehoboam became King of Israel. The people came to him to ask that he lightens the burden which his father Solomon had heaped on them. But rather than listen, he retorted that his most little finger was fatter than his father’s loin! The boast of an ingrate son, you may call that. The impish son did not stop there he boasted, “If you think my father was hard on you, well, I’ll be harder! Yes, my father was harsh, but I’ll be even harsher! My father used whips on you, but I’ll use scorpions!”

Unfortunately, we are in a similar situation today. Things that were hitherto unknown in this clime are beginning to happen before our very eyes. Fathers are sleeping with and impregnating their daughters, mothers are doing untoward things with their sons. The atmosphere in the whole country has become toxic. Life has become cheap and meaningless. People can no longer go out and sit and have a drink or two in a bar without wondering or looking suspiciously at every entrant, why have we fallen so low? How did we get here? When did suspicion become part of our daily lives?

People have different ways of coping with stress or pressure, and science has tried to explain to mankind why things happen and how to make sure they don’t repeat themselves. However, in this clime science and arts, in fact, the knowledge industry, are not taken into cognisance. We scoff at systematic ways of doing things and that is why things are falling apart and the centres are crumbling like some badly stacked pack of cards. It has become terribly tough to buy any reading materials today and those who should care don’t. After we have killed or allowed paper mills top die; printing and publishing materials have become so expensive that to buy a book or even ordinary newspapers have become secondary. The door of ways of escape are been closed. So how do you excite yourself today?

So what do we use as an escape measure? Nothing, I’m afraid. To the writer Graham Greene, “Writing is a form of therapy” according to him, when he is troubled he resorts to writing as a way of escape. If he used writing as a therapy of escape what will those of us who are not writers of his status use as a way of escape? Some of us have chosen reading. However, this has become increasingly difficult to do in Nigeria of today. Good books are getting expensive and out of the reach of the masses and it is only a person that has taken care of the immediate demand of life such as food, shelter and clothing that would remember that reading makes a man! Can a hungry soul read and understand? No. As the Yoruba say; Eni ebi npa kogbo iwasu– a hungry man cannot listen to a sermon.

Why are youths resorting to drugs and cultism? It is their own ways of escape when we have closed down or fail to stock all neighbourhood libraries and denied them legitimate and enduring escape routes.

In the words of the eminent writer W. H. Auden, “There must always be two kinds of art: escape-art, for man needs escape as he needs food and deep sleep, and parable-art, that art which shall teach man to unlearn hatred and learn love.”

If we are to save this generation we must find creative ways to bring down cost of this ways of escape and the government is in the best position to do this. Or else…

Continue Reading
You may also like...
Related Topics:escape, nigeria, way

Murdered Without Mercy: Heartbreaking Story Of Prophet Who Left America To Change Nigeria & The Igbo Nation
Nigeria Has Returned To The Hobbessian State Of Nature Where Life Is Short, Brutish And Nasty