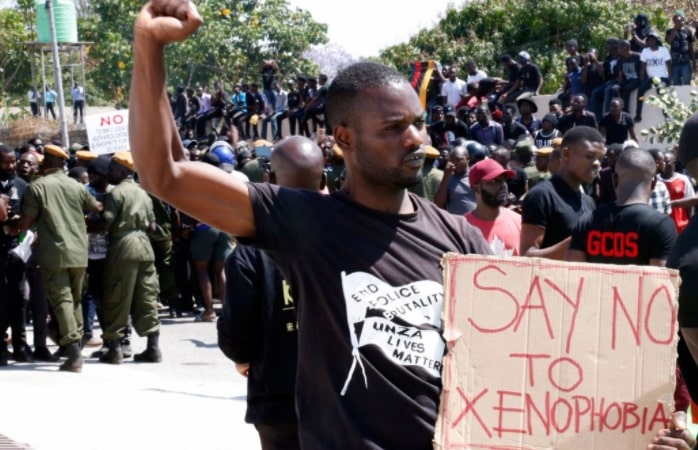 The famous Mayflower School, Ikenne was founded on strong principles of problem-solving, self-sufficiency, and humanism. Its founder, Dr. Tai Solarin, is a renowned humanist and educationist established in 1956. The ex-Mays (as the Mayflower alumni are called) who were around either when late Solarin was actively teaching (at a time when William F. Kumuyi attended in the 1970s) or in his lifetime when he just patrolled the expansive school compound in his signature brown shirt, short pants, and hat to match (in the 1990s) will readily testify to the quality of education the school had to offer. What many do not know is the fact that at the time, Mayflower boasts of one of the largest community of Ghanaians (and other Africans mostly refugees from war-torn Liberia, Sierra Leone, South Africa etc) which made it unique for its rigorous teaching, discipline, and moral aptitude. The Ghanaians teachers (and other non-teaching staff) found refuge and home in Solarin’s Mayflower after the popular “Ghana-Must-Go” actions by Nigerians against their West African neighbours in the early 19080s. Truly, we all can’t be xenophobes.

Like most Nigerians, I watched with dismay how some misguided South Africans destroy properties belonging to Nigerians and other African brothers under the pretense that they are criminals, drug peddlers, or “taking our jobs”. This was the belief of Nigerians in the 1980s too. They hoped the “jobs” these foreigners have taken will be enough to sustain them after they’ve left. What were Ghanaians doing in Nigeria at the time in terms of occupation? Teaching, barbing, hawking “puff puff”, shoemaking and in some cases, prostitution and minor crimes. With the nation’s economy experiencing recession due to slump in international oil prices, the Shehu Shagari administration undertook some desperate economic measures including the National Economic Emergency Act (Austerity Measures) in 1982. When the situation did not immediately improve and facing possible election defeat in the face of formidable opposition in 1983, Shagari hurriedly signed the Expulsion Order for Ghanaians and other African nationals to leave the country in ninety days. Even the desperate appeals from the Organisation of African Unity (OAU) and other international organisations could not persuade Lagos to change its mind. Nigerians need Ghanaians jobs. Like President Trump who thinks Mexicans and nationals of other countries are “bringing drugs, crimes” or that “they do not send their best”, Xenophobes are adepts at baseless generalizations. After all, foreigners are “sh*thole” countries.

In 2019 or thereabouts, I watched a video depicting a young South African in an ANC-inscribed shirt ordering other African nations to “leave my country and go back to wherever you came from.” This man, by my estimation, should be in his 30s. If my estimation is correct, it means he was either a kid in the heat of apartheid (in the ‘80s or early ‘90s) or wasn’t born at all. He may never have really known that apartheid regime was actually xenophobic. With Apartheid History barely taught in High Schools, nobody informed him about how his parents were forbidden from visiting certain places in South Africa by their privileged Afrikaans or Boers. Also, nobody probably told the poor dude that the Africans he was fighting were not the reason he has no job or means of livelihood. But, who will tell him when he’s been made to believe the menial jobs or small businesses fellow Africans were doing were the best he could do in a country his forefathers proudly called theirs? Logic, details. and rational reasoning are too expensive for xenophobes. They are dictators who will tolerate no opposition. If anyone dares caution them about the needlessness of xenophobia, s/he is immediately seen as a betrayer who must be destroyed too. Xenophobes derive joy from collective, unchallenged, unregulated display of madness towards others by appealing to people’s worst fears or emotions, creating enmity where there’s none, seeing the strange in the familiar, and encouraging people to see how different they are from others as their basis for power. Since xenophobes prey on bandwagon and human vulnerabilities for violence, xenophobes demand that everyone must either agree with them, be silent, or be destroyed alongside foreigners.

I normally see Nigerians expressing outrage whenever xenophobes in other countries attack our citizens. Sure, it’s politically correct to condemn xenophobia in other countries. Nobody wants to be classified as a “Nigerian fraudster” or “terrorist” just because some Nigerians have made crimes their means of livelihoods abroad. Nobody likes xenophobes in South Africa classifying all Nigerians as “drug dealers” even though many Nigerians are into this illicit trade. But for xenophobes all over the principle is simple: if one (or a few of you) is bad, everyone else is bad and must be made to “go back to wherever you came from.” It sounds familiar, right?

Only recently did some Nigerians show how much of xenophobes they are. This time, the victims of the xenophobia aren’t citizens of others countries but Nigerians like themselves. The Governor of Ondo state, Barrister Rotimi Akeredolu, set the tone by ordering all herders (who are ethnic Fulanis) to vacate the state within a week. As if that was not enough, a political thug, Sunday Adeyemo (aka Sunday Igboho), who holds no office or authority under the Nigerian Constitution, issued an order for all “Fulanis to leave my father’s state” and other states in the South Western part of Nigeria. I watched with dismay how those who should know better supported and rallied support for this motor park miscreant. Soon after, the so-called Eastern Security Network – a creation of the banned Indigenous People of Biafra (IPOB) – soon issued a similar notice to leave the South East. Like typical xenophobes, they carried out these threats unchecked (perhaps with tactic political support from some quarters) raiding settlements (some of which date back over four/five decades ago), burning, looting, killing, and maiming people in the process just for the crime of looking like Fulani or herdsman. If this isn’t xenophobic enough, nothing will!

Admittedly, the age long farmer-herder conflicts need to stop but the problem has been how to stop it. Virtually all solutions put forward have been rejected by either party mainly for political reasons. That said, the xenophobic arguments of driving away people “from our lands” for just being Fulani or herdsmen remains ridiculous to me – and will always be. That sounds to me more like deporting all Nigerians from South Africa as the solution to drug abuse or other crimes. I am equally not persuaded by the arguments of herders on the continuous practice of open grazing which is one of the contentious matters in the farmer-herder conflicts. This sounds archaic. It’s like the telling countries like Denmark or Norway to go back to the “golden age of Vikings”. While it’s true that these countries founded by the Norsemen tribes, technology has fast eroded the culture of the Vikings. The statements of some leaders of the Mayetti Allah Cattle Breeders Association of Nigeria (MACBAN) sounds misplaced and dubious. I agree at this point with the Governor of Kano state, Umar Ganduje, on the need to restrict movements of inter-state or trans-border herders since it appears they account for most of the cases of disputes and criminalities.

If Apartheid was terrible and xenophobia is condemnable, we have no moral justifications to profile whole ethnic groups or occupations as criminals even to the extent to choosing for them where to live and work. As a Nigerian citizen, nobody can choose for me where I should live or work just because of my tribe or occupation. Under the international migration laws, there are no “settlers” especially if you’ve lived or worked in a place for over a decade. Burning down settlements, properties, or even outright killings under any guise is condemnable. If we condemn South African xenophobes and their actions against fellow Africans, will our own inherent xenophobic spirits allow us to condemn our own xenophobia? What would have been our reactions if white racists in US or South Africa did this to blacks and telling them to “go back to wherever you came from”. Yet, black neibourhoods have unenviable and annoying records of gun violence, drug abuse, sexual violence and other crimes, but will that be enough to profile all blacks and people of colour as “criminals”? except you’re a hypocrite, you can’t tell me there are no criminals in your community.

While I’m open to finding workable and acceptable solutions to the perennial farmer-herder conflicts in Nigeria, the short-sighted arguments of local xenophobes and ethnic bigots do not appeal to me in any way. Aspects of agriculture like livestock and food production are pivotal for the nation’s economy. This is why I’m passionate about a workable solution to the problem, not the local xenophobes’ knee jerk “go back to where you come from” arguments. The livestock business alone is a multi-million-naira industry which, if well managed, Nigeria would have effectively diversified its economy from oil. What the resident Fulani and herding communities should do in the immediate term is cooperate with security agencies to help fish out criminal elements within them.

All human communities – either indigenous or settlers – have their criminal elements too. It is not out of place for an age long problem like the farmer-herder disputes not to have criminal dimensions like cattle rustling, land grabbing, property theft, etc. So, we shouldn’t reduce ourselves to xenophobic tendencies of ethnic or racial profiling for crimes. I also urge the governors of the states to commit to protecting the lives of all – irrespective of tribes, religion, or socio-economic status – who live in their states as stated in the 1999 Constitution.

I was back in Mayflower having left a long time ago to fetch some documents some years ago and ran into one of my old Ghanaian teachers, Mr. Kobeina. He somehow still recognized me with the way he said “Adigun, you have really grown.” I smiled watching this man who flogged the devil out of my younger body several years earlier. I was still mildly scared of him especially his firm grip of my right hand though he’s retired now. He still lives in Ikenne with his family. As he told me, he chose to stay back in Nigeria– a country that he has known all his life. He came to Lagos as a boy immediately after Nigeria’s Independence but had to deal with the shock of “Ghana-Must-Go”. He remains eternally grateful for what Mayflower – where he calls home –has done for him and his family. His priceless, brown teeth smile is a constant reminder to me that we can’t all be xenophobes!

About the author: Olalekan Adigun, a public affairs analyst, writes from Lagos. He tweets from @MrLekanAdigun

Continue Reading
You may also like...
Related Topics:nigeria, xenophobia

Seven Men Whose Wives Are Making Waves
The Miracle Of The Brain: A Motivational Article For Africans