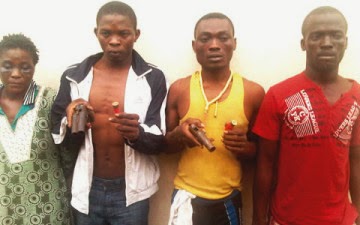 According to Punch, 4 members of a robbery gang recently nabbed by Lagos Police Command have confessed that they usually pray to God before any operation.

One of them, Mutalubi Abdullahi, said that the prayer was to ensure that only ‘sinners’ would be dealt with by the gang, while the ‘innocent’ would be spared.

Abdullahi, who was arrested along with Ismaila Moruf, Opeyemi Akinyemi and Sarah Emmanuel, were arrested by the operatives of the Special Anti-Robbery Squad of the command, for robbing early morning pedestrians and motorists in the Mile 2 area of the state.

The police said the female member of the gang, Sarah Emmanuel, allegedly supplied two of the three guns. It was gathered that two of the guns had, however, been recovered by the police.

The police said the suspected robbers, who were arrested from their respective hideouts in Iyana Iyesi, Sango Ota, Ogun State, also operated in the Agege, Isolo and Oshodi areas.

It was gathered that the mode of operation of the gang was to attack unsuspecting motorists and pedestrians on the expressway early in the morning and during traffic hitches.

But 29-year-old Abdullahi from Igbeti, Oyo State, said he and other members of the gang were driven into robbery by poverty. He said they were careful to rob only those who deserved to be robbed.

He said, “That is why we usually prayed to God before embarking on any operation. The prayer was for God to protect us and to bring only sinners our way so that those who were innocent would be spared.

“I was formerly working as a panel beater in Oyingbo, Lagos State. I started robbing just last year. I have gone on robbery operations about 10 times.

“The gang has three guns. We only use the guns to frighten people. Mile 2 Expressway, Alapere and Oshodi are areas where we operated. The money I made from panel beating and okada riding was not sufficient. That was why I took to robbery.”

Thirty-year-old Akinyemi, who was an also an okada rider before joining the gang, said he made about N25,000 from each robbery operation.

He said, “I was an okada rider, but when I had an accident with the okada, I stopped the business. I made about N25,000 each from about four operations I went with the gang. Our style was to attack people during traffic jams. My wife did not know I was a member of a robbery gang. It is true that we prayed before our operations, asking for protection as we went out.”

Moruf, 30 from Epe, Lagos, said he was lured into the gang after his job as a roadside mechanic did not bring sufficient income.

The only female in the gang, 31-year-old Emmanuel, who allegedly supplied them with guns, said her friend, Modinat, convinced her to buy the guns for the gang.

She added that apart from getting guns for the gang, she had not gone for any operation.

She said, “I was working as a hairdresser. It was one of my friends, Modinat, who called me and said the gang needed a gun. Modinat was a girlfriend to one of them. She then asked me to come with her and I did. We got the two guns for N25,000 at Idi Iroko from some mechanics. That was in February. I know I am guilty.”

In this country, everybody is praying to God, even politicians who are milking the nation dry do call on God. Now, armed robbers too have started praying for God’s favour. Chei!! Diaris God o..