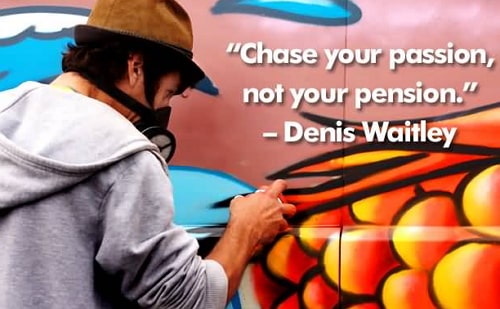 DEPENDING TOTALLY ON SALARY AND PENSION WILL PUT YOUR FINANCIAL LIFE UNDER TENSION!

Never Get So Busy Making A Living That You Forget To Make A Life; Pursue Your Passion, Not Your Pension!

“If you don’t find a way to make money while you sleep, you will work until you die”- Warren Buffett

I have observed that there is a psychological link between ‘Pension’ and ‘Tension’.

When you depend totally on pension, your financial life will be under tension. And if you are living in my part of the world (that is Nigeria), it can actually give you hypertension! .

Kevin Ngo said, “If you don’t make the time to work on creating the life you want, you’re eventually going to be forced to spend a lot of time dealing with a life you don’t want.”

Financial instability happens when you design your whole life around salary and pension. Real financial security and freedom is not in your job or pension, but in your passion, gifts, talents, and your ability to see and seize opportunities. When all you think about is salary and pension, it is an open invitation to financial misery.

Someone said, “Your salary is the bribe they give you to forget your dreams”.

I believe there is an iota of truth in this quote because most times, if care is not taken, we become so much busy with our job that we have little time for our dreams. Many people run aggressively after money and forget that the true purpose of having money is to give us ample time to pursue the critical things of life. There are two categories of people in life: it is either you’re a pensioner or a ‘passioneer’.

Evolving from being a salary earner to living a life of impact and financial freedom is never a coincidence; it must be intentional. Mark Twain said, “Plan for the future because that’s where you’re going to spend the rest of your life”.

One of the greatest financial decision you will ever make is to think outside the box and design your life beyond your salary and pension.

Design your life around your dreams, gifts, and passion. Farrah Gray said, “Build your own dreams, or someone else will hire you to build theirs.”

Design a future that makes you less dependent on salary and pension, and don’t confine yourself to a lifetime of living on someone else’s schedule.

No one ever becomes wealthy with their jobs!.

Bill Gates said, “I failed in some subjects in exam, but my friend passed in all. Now he is an engineer in Microsoft and I am the owner of Microsoft”. Design a life that you don’t need to take a vacation from, a life you don’t need to retire from.

Don’t be addicted to your salary and pension, they can stifle your initiatives. Salary is becoming increasingly unsustainable and undependable. The only income that is sustainable is the one you earn from putting your gifts to use and not the one from your job. Apart from the sober truth that the proceeds from salary is unsustainable, you could actually get fired from your job.

The inspiration for this write-up came some few days ago when I visited the world famous KFC outlet around my work place for a personal time-out from my very busy and hectic schedule.

I ponder deeply how a man at the age of 65 made a revolution that has now become a franchise all over the world. The evolution of Kentucky Fried Chicken (KFC) underlines fruitlessness of getting addicted to your salary and pension at the detriment of your passion.

Colonel Harland Sanders was an American business magnate best known for founding KFC and later acting as the company’s goodwill ambassador and symbol. Sanders went through traumatizing experiences that eventually shaped his life.

In 1903, Sanders dropped out of school and lived on a farm after arguments with his stepfather. Between 1903 and 1930, Sanders was in and out of job several times, living a life of absolute dependence on salary.

He took a job painting horse carriages, worked as a farmhand for two years, worked with his uncle in a street car company as a conductor. He enlisted in the United States Army prematurely at the age of 16 and was discharged after three months. He moved to Sheffield and worked as a blacksmith’s helper and two months after as a train cleaner.

He later enrolled as a fireman, worked as a salesman thereafter and also sold life insurance. None of these actually brought him fulfillment.

In 1930, Sanders finally quit working as a result of the great depression and decided to look from within what he could do to make a difference. The turning point came one day as Colonel Sanders was sitting on his porch in Corbin, Kentucky.

One morning, the mailman came up the walk and handed him his first social security check; then, he was 65 years old.  Broke and defeated, he looked at the check and said, “My government is going to give me a hundred and five dollars a month so I can eke out an existence. Surely there is something I can do for myself and other people.” He was internally motivated and began to engage himself in deep thinking, and deep thinking always produces results.

The thought of his mother’s special recipe for fried chicken came to his mind. It was a particular formula which he considered somewhat special. Sanders began to cook chicken dishes and finally opened a little restaurant. Sanders decided to sell Franchises for marketing his fried chicken formula but was turned down by scores of restaurants. After much rejection, he rounded up some investors and the legendary Kentucky Fried Chicken (KFC) was born.

Harland Sanders’s impact was so significant that Kentucky Governor, Ruby Laffoon, in 1935 made Harland an honorary Kentucky Colonel in recognition of his awesome impact; their advertising logo says it all – ‘We do chicken right’.

There will always be something that you can do so well that people will be willing to pay for it! I want you to take a deep break to ask yourself this one question: what is that one thing that I can do right?

Sanders’ life pointed towards the fact that there is a value that we can add to the world as long as there is something that we do so well. You can’t fully live life until you learn to give expression to your passion. What is your passion? It can be music, writing, acting, painting, sports, fashion designing, teaching, arts etc.

Normal Cousin said, “The greatest tragedy of life is not that we die, but what dies in us while we live.”

Don’t carry your passion to the grave! We must learn to work harder on ourselves more than we do on our job. What you become is far more important than what you get.

Myles Munroe said, ‘’Wealth does not come from your job; it comes from your personal gifting”.

People that will make maximum impact in life are not going to just be salary earners. They are people that have looked inward to solve a problem or add value by putting a great demand on their creativity, abilities, gifts, talents, and experiences. Walt Disney’s love for sketching and drawing created one of the most vast entertainment company now known as the Walt Disney Company.

KFC (Kentucky Fried Chicken) was born out of someone’s hobby of cooking.  Presently, KFC has over 43,500 restaurants in more than 135 countries and territories in the world. The Walt Disney Company has over 195,000 employees operating in 45 countries in the world as a result of one man’s unique gift of storytelling that began with Walt himself.

Imagine if Disney and Colonel Sanders (the man behind the KFC) never put their unique gift, talent and special abilities to use, many people in the world today will remain unemployed.  Imagine the level of unemployment that would have ravaged the world if Sanders and Disney died as a salary earner or a pensioner!

The illusions of salaries, jobs, and pensions had stagnated the pursuit of many for excellence and impactful adventures.

Never get so busy making a living that you forget to make a life!.

You become financially free when you no longer have to work for money because money is working for you.

Even if you work for the government, your pension should be an added advantage and must never be the object of your pursuit.

QUOTE OF THE WEEK: “If you don’t design your own life plan, chances are you’ll fall into someone else’s plan. And guess what they have planned for you? Not much.”—Jim Rohn