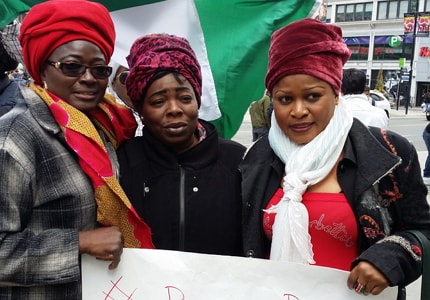 Just wondering why it’s not racist or discriminatory for the Canadian government to single out Nigerians to blame for the influx of people walking into Canada from the US. Well lets pretend all is well since the ministry is led by the first Black Canadian immigration minister, who originally migrated from Somalia, a success story many Nigerian Canadians celebrated as a sign they have representation in government.

We are quick to forget just a year ago when Prime Minister Justin Trudeau went on Twitter to appeal to everyone who felt oppressed to relocate to Canada and they will be welcomed. Well he got praises on Twitter and the US media. Canadian media immediately produced heart warming stories filled with images to demonstrate how hospitable and easy it is to cross into Canada from the US. And anyone who voiced any concern was labelled racist, especially if you have a positive view of Donald Trump.

A year later, the tone is changing because it won’t be business as usual since election is next year and the number of people seeking asylum in Canada by crossing through the US has now tripled to over 300 per day and most immediately get access to social services, housing and funds not available to unemployed Canadians or Seniors.

As a Nigerian Canadian, I have never heard the media or politicians single out any other ethnic, national or gender as culprit for an ongoing violation done by all races, nationals and gender. Would these politicians have reacted in a similar way if these were Asians, Jews, or white Europeans. But lets assume the statistics indicates more Nigerians are responding to this invite compared to others, could this be because Nigeria is presently experiencing terror attacks from Boko Haram and recently the Fulani Herdsmen. Statistics shows Nigerians have consistently excelled overseas and are hardly a strain on the social welfare system. According to the United Census Bureau, 4 percent of Nigerians hold the Ph.D. degree compared to 1% of the general US population. 17% of Nigerians hold the Master degree and a whopping 37% have the Bachelor’s degree. Most Nigerians take pride in building their career and being a role model for their kids.

Thanks to Mr Ahmed Hussen for joining his boss in using Nigerians as the punching bag as most Canadians will now be hostile towards Nigerians. When Canadians see their taxes go up or see lapses in their quality of health care or transit, they won’t remembers it’s the tweet of the PM that invited the entire world and not Nigerians that should be blamed neither are Nigerians the only ones complying to the invite.

But since we have a black immigration minister then this can’t be racist I guess. I see why many believe politicians often divide us based on race and religion for political gains.

Hope the same government will dare mention South Asians (Indians) when talking about mortgage fraud or auto insurance fraud or mention Chinese and Vietnamese for illegal drug Grow Ups, and I can go on and on. Myself and many Nigerian Canadians have often voiced opposition at any attempt to label Somalian Canadians as those who manipulate the welfare system to get pay checks and refuse to get a job. So Mr Hussen why should it be acceptable to use Nigerians as a punching bag and window dressing for an issue that’s not exclusive to Nigerians. We strongly hope you will take a moment to mention other nationals or race coming into Canada as well.

It’s never racist when we all choose to allow this stick. Is Canada no more welcoming to the oppressed and persecuted as our Prime Minister tweeted last year before tweeting 5 months later that Canada is still welcoming but also has laws. How I wish the initial tweet had same conditions.Despite two major terrorist groups have consistently bombed and killed the innocent in Nigeria till date leaving millions displaced, the Canadian government is busy actively romancing the US to stop issuing visas to Nigerians. I thought same government and media were outraged when the Trump administration singled out some Muslim countries for their temporal immigration policy. I can’t believe such a flip flop is happening in 2018 without any outrage, so just maybe we Canada systemic racist society with a brand that’s absolutely different from reality.

Well I hope our PM is not excluding Nigerians from those invited to the party. I hope we get the opportunity to lecture our 1st black Immigration Minister on the consequences of his words and actions. Am only writing because I think these two charismatic politicians can do better, just has they have done in the past. I strongly hope the Canadian government will continue to build bridges not walls. Nevertheless, the idea of securing the border with the military is not a wise option, because this will only endanger more lives.

Continue Reading
You may also like...
Related Topics:canada, Nigerians