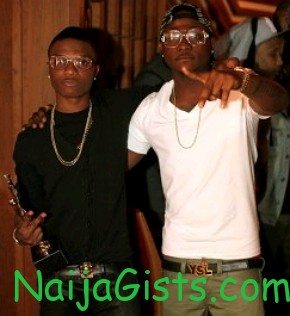 What Happened To Davido’s And Wizkid Friendship?.. See How They Tearing Each Other Apart

Wizkid broke the internet when he released FEVER video… and we all were just too shook to handle the peppery stew starboy served us, with Tiwa Savage.

It should also be worthy of note that his ‘best friend’, Davido neither commented or hailed Wizkid on his new video!.

The duo, after they made up, and called themselves ‘best friends’ on stage were known for making bants on Twitter..

So, apparently, we expected a little bant from Davido to Wizkid over his FEVER Video.. But there was nothing!.

Why on earth will you compare this video, Fact you don’t know;

1. Davido found his heart desire but Tiwa found her own heart desire
2. Chi is single while mum jam jam is divorced
3. You learn good vibes from dav and chi but in other way you learn how to run after someone’s wife or little boy
4. Chi outfit in assurance video compare to mum jam jam outfit
5. Assurance video can be a lesson to young lad, but fever video teach young lads how to run after old woman and I don’t care attitude

If you are worried about this, please pull up at your own risk. If you keep watching this video, and you happy with what you’re seeing I pray that what happened to TeeBillz happen to you, stay strong brother.

That didn’t stop there… Apparently, the originator of the list, Aloma continued mocking Wizkid and Tiwa.

Fathia Balogun Recounts Encounter With Secret Admirer In The US
Uche Jombo Still Living In Denial Years After Marriage Crashed, Says She Is Ok With One Child