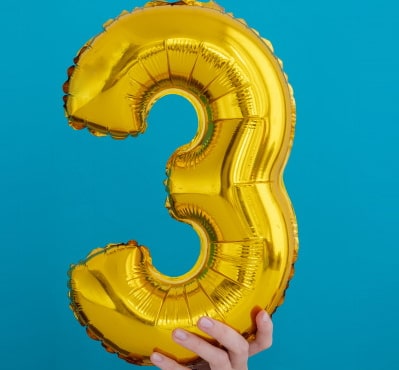 What Exactly Is It About The Number 3?

What’s your take on the number 3? Well, let me start by saying as human beings we understand numbers, and this is because we live in a world where things come in different numbers.

From 2, 7, 12 to 14 and so on, throughout history, diverse cultures and people have highlighted different numbers as significant and ritualized making them, making them culturally important.

My own fascination with the number 3 however, stems from its influence, which cuts across almost everything and virtually every age, to the extent that according to Christians, even the almighty God reveals himself to us a Triune Being.

But, as expected, the Islamic theology as well as some Christian groups like the Jehovah’s Witnesses who, relying on Biblical verses like John 1:14 to push their argument that ‘God is one’, insist that “how can an individual be with someone and then be that same person…?”.

Although they fail to define exactly what the number 1 actually mean, opponents of the Holy Trinity doctrine also fail to tell us why it is that throughout history, the number 3 has had a unique and profound significance to countless generations.

Now, I am not an expert or a theologian, but I know enough to believe that there is something about the number 3 that makes reading about it interesting and might just give a perfect understanding of the God Who Himself appears to us in 3 forms just to upgrade our knowledge.

Take the world for example, throughout history, no matter what culture you look at, the most important things come in 3s. The Jehovah’s Witnesses say this is where the Christian doctrine of the Holy Trinity draws its pagan sources since we see 3 replicated in cultures worldwide, but they fail to tell us why the whole world take the number seriously in the first place. Even in the Holy Bible, as we shall see in this write-up, 3 features so prominently in almost all the most important events and stories.

Because of this, the “Ancient Alien theorists” group insist that there is an extra-terrestrial connection to the number 3. They insist that “once we understand the extraordinary power of 3, we ourselves will become like our creator(s)” because “the creator(s) left us signs pointing to the power of 3 in various monuments across the world”.

While not confirming or denying this point, at least I know that the prominence of the number 3 predates even organized religion.

For example, in a place called Newgrange Stone Passage Tomb in Ireland, there exist 5000-year-old walls that are decorated with certain mysterious circular lines, all of them in in 3s. Some people might dismiss this as just another artistic expression from ancient people and it would make sense until you realize that in the Yunnan Province of China, you also will find some huge Buddhist tower temples, 3 of them in number, 1,100 years old, called the Three Pagodas. The thing is, these three structures are designed in such a way that they form a triangle and they are said to protect the population from natural disasters. Then in ancient Greece, they believed the destinies of the gods and men are determined by three all-powerful beings known as the three faces. These are just a few of the countless cultures around the world who hold the belief that 3 represents something sacred, something that dates back as far as man can remember and cuts across all facets of human endeavor, art, architecture, mythology, literature, science and especially religion.

Even as humans, consider your body, most Christians say we are made up of the body, soul and spirit, that’s 3. Take a look at our lives, past, present and future, our story itself falls perfectly into 3, and the basic things our bodies crave for are food, water and sex, 3!

Are these signs, is God himself leaving us clues?

In the bible, Jonah is in the belle of the wale for 3 days. In Genesis, God separates the water from the earth after 3 days. In the transfiguration, Jesus is in company of Moses and Elijah, making them 3, he is in the tomb for 3 days, at his baptism, he steps out of the water, the Holy Spirit appears in the form of a dove and the voice of God is heard, making 3 of them, I can go on and on.

Now, let me digress a little. In the Giza Plateau in Egypt, three great pyramids decorate the landscape just outside the city of Cairo which is believed to have been constructed about 4000 years ago. Some experts say these pyramids were built by people who had the knowledge of geometry at the time, and that they are arranged in the form of a perfect triangle, and you know what a triangle represents, 3! They say it appears that our intrigue with sacred geometry may have been hard wired into us, which is why we express geometry in our monuments.

Is it this worldwide belief in 3 that inspired theories that the pyramid of Giza represents a portal, or gateway to the realm of the gods or God?  Take note that even the pyramids are shaped as triangles.

In Samos, Greece, in the 6th century, mathematician and philosopher Pythagoras introduced his famous theorem A2+B2=C2 which explained the mathematical relationship between the three sides of a right angle triangle. Some experts have argued that his work was originally based on pyramids design. They say he brought Egypt to Greece and thought that everything in the universe has a 3-part structure and that the number 3 is the gateway to understanding the mysteries of the world.

In Cambridge University, England, experts say the research papers of sir Isaac Newton, one of the most influential scientists of the 17th century, introduced what became the foundation of modern physics, when it talked about the 3 laws of motion. Some say since he practiced Alchemy and was someone that could be described as a mystic, and in alchemy and mysticism 3 is considered a powerful number, it was natural for Newton to try to communicate information with the power of 3. What more, Alchemy was not just about the transmutation of pure matter into gold, it was also about the knowledge of the secrets of the universe and how man can transform himself into becoming one with the universe. In alchemy, 3 is the power of transformation and bear in mind also that Jesus rose on the 3rd day.

In the Hindu tradition, there are 3 great divine energy involved in the creative process, and one of this energy Shiva, often depicted as having a 3rd eye in the middle of his forehead, is thought to have 3 powers which are will, action and knowledge. This 3rd eye is the center of spiritual power according to them, and it is aligned in such a way that it forms a triangle that can be traced to a point in the human brain called the pineal gland. Was this why in 2013, former president of the United State Barrack Obama unveiled an ambitious government funded research programme named “The Brain Initiative”, designed to map the human brain and shed light on how humans learn, think, remember and create?

The pineal gland is a light sensitive organ that’s no larger than a grain of rice located in the human brain within the endocrine system. Though it is located deep within the center of the brain in-between the two hemispheres, experts say it appears to share some characteristics with the human eye. Though not its primary function, because it is light sensitive, it is sometimes called the 3rd eye.

I can go on and on, but the thing is, why do we function differently from all other animals on this planet? Why do we create art, music, write books, bury our dead and create time to contemplate our own existence? Do we really have a 3rd eye? If we are created in the image of God, and are three in dimension with a 3rd eye, why do we deny that our creator is triad, trio or trinity or whatever you choose to call it? WHY?

One of the most ancient Catholic cathedral in Germany has played host to a steady stream of visitors, for centuries, who go there to view a golden sarcophagus thought to hold the remains of the three wise men or Maggi who visited Jesus at his birth. Various explanation has been offered about who these men were, but according to the bible, they were three king come from the east. For me, the question is not about who they were, but why they brought three gifts according to tradition and the Bible. Gold, which representing material needs, Frankincense, representing enlightenment, and Myrrh an oil associated with death and embalmment representing the afterlife, 3!

There are theologians who insist that understanding and unlocking the power of 3 lies in the mystery of the Holy Trinity. That the notion of 3 divine being in one God refers to the three states of being: God the father as the intellectual or ethical self, God the son as the physical and actual self, and God the Holy Spirit, the emotional or aspirational self. Past, present and future. 3!

Finally, experts say even within the human genetic code, the discovery in 1966 of a series of 3 molecule combinations known as codus or triplets in the universal structure of the DNA, proves beyond doubt our triune nature like our maker(s)…

Added to my fascination is a question; what exactly is it about the number 3?

About The Author: Albert Afeso Akanbi is a writer, documentary filmmaker and humanitarian. He writes from Abuja, FCT, Nigeria.

Continue Reading
You may also like...
Related Topics:biblical meaning of number 3, biblical numerology 3, what does the number 3 symbolize, what is so special about the number 3, when god says something three times, words repeated three times in the bible