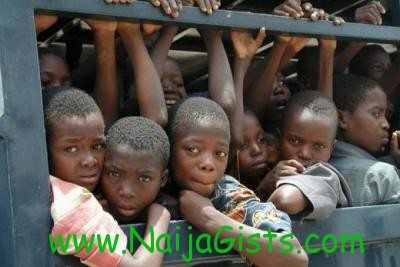 2 Nigerians and one Lebanese are cooling their heels with men of the Nigeria Civil Defence Corps for alleged involvement in human trafficking in Kwara state.

The three suspects are Wasit Muhammad; Olatunji Sanusi, a lawyer and Tunde.

The gang also included one Joseph, who is presently at large.

The case is soon to be handed over to the National Agency for the Prohibition of Trafficking in Persons (NAPTIP), Press Secretary to Kwara state Governor AbdulRahman AbdulRazaq, Rafiu Ajakaye has said.

The Governor condemned the rising trend of human trafficking in the country, calling it inhuman and unacceptable and warning that anyone caught should face the full weight of the law.

“Governor of Kwara state is horrified by the video footage of one Ms Ajayi Omolola, who is a victim of human trafficking. Omolola, whose parents live in the Kwara state capital Ilorin, was tricked into travelling to Lebanon in the guise of engaging her as an English tutor. It turned out to be a case of human trafficking and slavery,” Rafiu Ajakaye, spokesman to the Governor, said in a statement on Friday.

“The governor condemns this development in the strongest terms possible, and has immediately linked up with the security agencies to get to the roots of the matter.

“We are glad to announce that three suspects, comprising two Nigerians and the Lebanese referred to in the footage, have been arrested in connection with the case and the suspects are being interrogated. Apart from Ms Ajayi, discreet investigations by the Nigeria Security and Civil Defence Corps (NSCDC) in Kwara State have revealed that there are at least 28 other victims of this horrible trafficking gang.

“His Excellency, meanwhile, is also linking up with relevant federal government and international agencies, including the Ministry of Foreign Affairs and the International Organisation for Migration (IOM), to ensure that Ms Ajayi and others are released from this human bondage. He also commends the NSCDC for the great work so far done on this matter.

“The governor is concerned that fellow human beings are engaging in another round of slavery despite the horror and unquantifiable loss of the 20th century. Kwara will never tolerate such inhuman and unlawful trade.

“He requests citizens to expose any of such activity they may know of. He also calls for the highest penalty for anyone caught in the activity, no matter their class in the society, to deter others from engaging in it.”