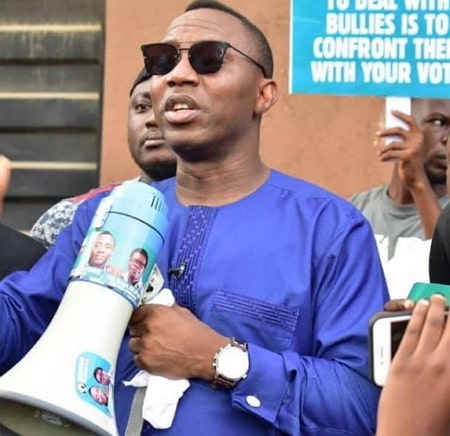 Sahara Reporter boss Omoyele Sowore and his “Revolution Now” protests command the question: when does lawful protest turn an invite to anarchy?

In today’s Nigeria, of endless politicking, directionless anger and ceaseless intrigue, you might not get a straight answer, basic as that question might be.

Yet, concepts are definite and clear. That is why they are concepts.

So, conceptually: can a citizen howl “revolution!” and still claim protection under the law?

Hear Sowore thunder, on July 25, on his so-called revolution:

“I’m not talking of protest. I’m embarking on revolution. 85% of Nigerians are in support. Don’t tell me about legal implications or what a Judge will say. I don’t care. We must bundle Buhari out of that place.”

Eighty-five per cent of Nigerians! Where did the bloke get his stats from?

Does that stay within the purview of civil protest? Or has crossed the threshold of threatened anarchy — even if talk is cheap?

Revolution, real or comic, implies the overthrow of the extant order. So, exactly under what law might its purveyor be seeking protection — the present law he seeks to overthrow? Or the inchoate one, he seeks to impose?

Talking about extant and inchoate law, is the sitting order expected to watch, helpless and dazed, as “revolution” wreaks havoc?

O, maybe “revolution” is radical protest in jest — very funny! But you can’t fault a sitting government for not finding the comedy amusing, can you?

The “human rights” lobby that indulge Sowore’s flippancy are entitled to their democratic delusion. That is pretty much predictable — as predictable as the state’s counter-roar.

Both indicate an intriguing, if mutual paranoia: the one for citizen liberty; the other for state security.

Ironically, both lobbies dramatize the creative pull, on which the state is delicately balanced.

No wonder — when the chips are down, both point a finger of guilt at each other; and citizens cheer or jeer, depending on which side of the divide they stand.

But beyond fixed tempers, it would appear even organizing the straight-forward, legitimate protest is facing a decline — like everything else in decayed, contemporary Nigeria.

Still, does that demonize legitimate protests in a democracy? Does it also endorse things as they are? Not a chance.

The basis of the pristine state, as teased out from the Social Contract, was security. That was why folks surrendered their individual freedom to the Leviathan, in exchange for collective security.

That founded the state; and the Leviathan concept gifted the state’s rulers sole access to legal and legitimate force.

But the finest form of the modern state pushes citizens’ liberty.

That, indeed would appear, why most states have morphed from monarchies to democracies, and ultimately the republic — that equal opportunity polity, where the people are citizens with equal rights under the law; not subjects, under the pristine Leviathan.

Sparta, with its military might and fierce patriotism, made quite a mark on antiquity, which still resonates till today.

Witness King Leonidas and the heroic 300, at the pass of Thermopylae — an all-time study in serving and dying for country.

But Athens climaxed the fruits of personal liberty, peaking in soaring intellect, underscored by advances in philosophy, theatre, mathematics and science, which pretty much have shaped modern civilization.

Witness the Athens of Pericles, that liberal lawgiver, under whom Athens hit its zenith: the best in every facet of life — scholarship, politics, art and science, theatre, sports, sculpture and fashion.

Still, individual liberty is a function of states. But the fundament of the state is order, hinged on laws.

So, citizen liberty is no more than a balancing act — the much latitude a citizen can have in expressing his freedom, without breaching the rights of others; and endangering the overall security of the state.

Therefore, if you bound into a territory, bawling and screaming revolution, and inciting citizens to take up arms — literally or metaphorically — you set yourself up for a sucker punch.

That pretty much describes Sowore’s “Revolution Now”. Again, if romantics feel otherwise, they are entitled to their delusions.

Still, the Sowore angle is no controversy over citizens’ rights. That is settled — at least under the democratic order. It is rather the how of exercising that right.

No right is absolute. Every right is moderated by law. Therefore, you can’t project a neo-Kabiyesi syndrome. (Kabiyesi is Yoruba for he who cannot be challenged or reproached; the ultimate power in Yoruba feudalism).

If you did, in a democracy, you attract the stern sanction of the law.

But that would seem Sowore’s attitude in his pre-protest build-up, scribbling “Revolution Now” graffiti on public walls, with his crowd in tow. That recklessness baits the simple and the excitable. The result could well be public disorder.

Besides, flashback to the self-aborted 2Face’s protest of February 2017. At its rump, Sowore declared himself unsatisfied with docile Nigerians, who wouldn’t troop out to scatter everything — or something to that effect.

In the build-up to this present one, he was even quoted to have threatened to set himself ablaze, like the Tunisian hawker, that triggered the Arab Spring protests. Those were rather disturbing streaks of anarchy.

Again, the human rights lobby would chuckle, and claim that comes with the protest territory. But the government would balk — and dutifully so.

Those who demonize the government on that score miss the point. Both divides — the government and the human rights ensemble — only hold on to their mandates, being differently wired!

So, the issue is not exercising human rights per se. Rather, it is claiming that right legitimately, since every action attracts consequences.

But again, that is waving the reg flag at the rights lobby. It would only get them more excitable and agitated.

“Revolution Now” is a grand distraction. Nigeria is in dire straights, where everyone ought to pull resources, for urgent solutions.

Ay, the present rulers have their own issues. But they are not the enemies here!

The enemies are rather those whose torrid choices in the past have come to plague our present.

Still, it is the cross the elected must carry, while warding off Mavericks, pressing democratic rights.

Sowore’s Arrest: The DSS Has No Integrity; Only A Non Performing Government Will Be Afraid Of Citizens Protests
Is Sowore Plotting To Overthrow Buhari Government?