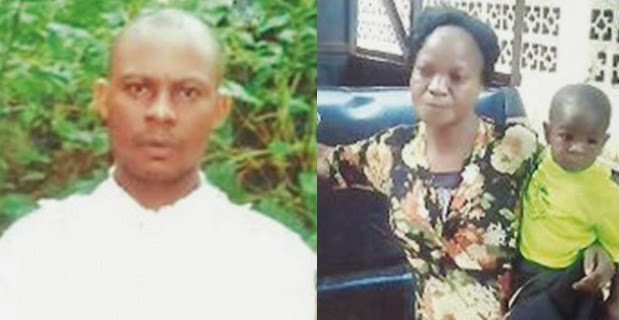 A self proclaimed prophet has been arrested in Imo state for stealing his church members babies.

Ndubuisi Okeobi, a 43-year-old founder of Divine Order of Cherubim Church has been nabbed by men of Scorpion Squad for allegedly specialis­ing in organising crusades where he in­vites pregnant women who deliver their babies in his church and thereafter sells the babies for between N300,000 and N600,000.

As at the time he was arrested at Umuoha in Mbaitoli Local Government Area of Imo State, more than five babies had been alleg­edly stolen and sold by the church leader.

The state Commissioner of Police, Mr. Austin Evbakhavbokun told Saturday Sun that Prophet Ikeobi was arrested on March 10 following an intelligence report which indicated that the church founder was working in cahoots with a syndicate which buys babies from him.

According to the police, the suspect’s modus operandi is to organise crusades for pregnant women who he would deceive to deliver their babies in the church to save them from being possessed by demons. For those that swallowed the bait and de­livered of their babies in the church, the prophet would allegedly organise the steal­ing of some of the babies and sell them to members of a syndicate who buy them for N600,000.

“On 24th January, Prophet Ndubuisi Okeobi stole a baby girl from her mother and sold her for N600,000 after her mother delivered her in the church. The woman went to take her bath after delivery, and when she came back, she discovered that her baby had been stolen. There was an­other incident in February when a baby girl was stolen from her mother, Mrs Chika Chibuike and sold for N600,000”, the po­lice boss disclosed.

He said based on reports, he had to direct policemen attached to the Scorpion Squad of the state police command to track down the church General Overseer. He was sub­sequently arrested with the help of youths when Ikeobi wanted to escape from Umu­oha.

It was gathered that the police was able to recover one of the stolen babies belong­ing to Mrs Chika Chibuike and N600,000 cash. After getting her baby from the po­lice, an elated mother, Mrs Chibuike said: “I am shocked to know Prophet Ndubuisi Okeobi is into crime. I attend his church, he always organises crusades for pregnant women where he used to prophesy that if he doesn’t pray for us, demons will attack our babies”.

On how her baby was stolen, she said: “Prophet Okeobi told me that I should go and take my bath while my baby was lying in my room. I delivered my baby inside the church. Before I came back from where I went to take my bath, Prophet Ikeobi had taken my baby girl away.

“I had to raise alarm and when Prophet Okeobi wanted to escape, the youths in Umuoha with the help of the police arrested him. The police has assisted me to recover my baby girl.”

Speaking on what transpired, Prophet Okeobi told Saturday Sun that the allega­tions against him were true but blamed the devil for luring him into crime.

“I started my ministry five years ago. I have not stolen more than five babies during the period. I have taken the police where we recovered Mrs Chibuike’s baby girl. All the other ones I sold out, we are still searching for members of the syndicate I sold them to. I want Nigerians to forgive me”, he pleaded.