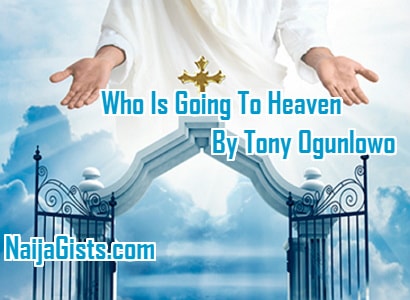 Everybody wants to go to Heaven. After our earthly lives are spent and finished we all want to go to a place of peace and happiness for eternity. It’s what inspires us to live Godly lives.

Some fraudulent pastors will have you believe that if you don’t pay your tithes you won’t go to heaven. Others will get you to believe they are God’s representatives on Earth through their display of ‘miracles’, ‘prophecies’ and ‘deliverance’ services and they can guarantee your ascent to heaven. Some Islam Imams convince their followers that if they kill an ‘infidel’( or infidels) they will go straight to Heaven or Paradise and other religious faiths have their take on what a Man must do to go to Heaven.

Before I go any further let me state that NO MAN KNOWS WHO IS GOING TO HEAVEN OR NOT – God decides that and not Man. How can a Plaintiff or Defendant in a case decide on what sentence a Judge is going to impose? So all pastors, Imams and everybody else who claims you will go to heaven is lying to you! At the end of the day they are only but mere mortals supposedly conferring God’s message to man. They themselves don’t know if they are going to Heaven or not. Ask your pastor- or whoever you believe in – if his name is in the Book of the Righteous who’ll be going to Heaven and he won’t be able to give you a straight answer, if he does he is a LIAR! How can a servant know what decision his Master is going to make even before he makes it?

It’s strange that Man who is a mere mortal can suddenly decide that despite the fact he’s not a supernatural being can decide where a person’s soul is going to go after death. So a pastor or Imam who has no control over life and death (- including his own) can suddenly know who’s going to Hell or heaven.

So who is really going to Heaven? Honestly I don’t know!

But the funny thing is nobody really knows! It’s not written in stone anywhere! When Judgement day (- for those who believe in it) comes, who knows what God will judge us upon? He is the Master of the Universe and we his creations. Do we really know his mind? Do we really know what he expects of us? (Well he does expect us to behave ourselves whilst we’re on Planet earth!)

Man and Women will come and go: each one professing to know how to get into Heaven. They will talk and talk and try and convince you they know best like a salesman trying to sell ice to Eskimos.

NOBODY: No Pastor, No Imam, No Guru knows who is going to Heaven or not. Only God knows – and he’s the guy who’s going to sit in the Judge’s seat on Judgement Day and not your pastor – and he can’t be bribed, lied to or otherwise.

So how do you get to go to Heaven?

I’m not going to lie and say I know a sure way but I believe in the guy who said ‘love your neighbour as you love yourself’. If you follow his teachings you’ll become a better person and a better human being. If he could make it to Heaven being the poor, simpleton he was I believe we can all make it.

Continue Reading
You may also like...
Related Topics:who is going to heaven