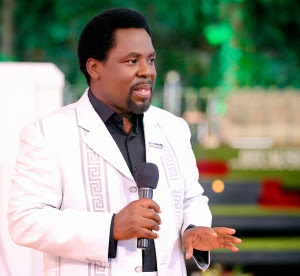 Why? Why do you want to arrest TB Joshua? I read this group of writers from the USA. Over five of them came together to pen and sign this long letter demanding for TB Joshua’s arrest. Summary of it was that he violated building law. This is all that TB Joshua did. What about the Town Planning Authority? Where were they? What were they looking at that they did not demolish the building? You want to arrest TB Joshua, but you do not know they should be arrested first?

TB Joshua only killed 100+ people who volunteered of their own volition and not under compulsion to visit him for miracles. They got miracles. We cannot say they were forced. Have you arrested Diezani Alison-Madueke? Where are those five spirited writers to demand the arrest of Diezani who has continued to steal $4 million every single day from the poorest kitchens in Nigeria through her illegal kerosene “subsidy” scam? Do we know how many her robbery kills everyday in hardship? Hundreds every day, and we want to arrest TB Joshua?

Have you arrested Farouk Lawani? Have you arrested General Ihejrika, the man who embezzled billions of dollars for our nation’s security and directly and indirectly facilitated/sponsored Boko Haram’s success? Have you clamored for his arrest for the transfer all those APC’s we are just recovering from Boko Haram after he was exposed, that were used to kill Nigerians in the thousands over the past 5 years? Where are your letters calling for his arrest? No, it is poor, hard-working TB Joshua you see because he is not the respected Cabal.

Have you arrested Ali Modu Sheriff? Have you arrested Fayose? Have you arrested Patience Jonathan known as “the greediest person in Bayelsa” who was caught smuggling $13.6 million; money for the poor and poisoned people of Bayelsa, out of Nigeria? Talking about smuggling, have you arrested Ayo Oritsejafor and President Jonathan, the gangsta cash and guns smugglers? Have you arrested Abba Moro, the self confessed possessed-by-the-devil Minister who humiliated all our youth, killed many and again was just exposed in another major scam, robbing Nigerians of billions? No, you have not arrested or insisted on the arrest of all these, but you want to arrest TB Joshua?

Have you arrested the Military officers who burned down BRT buses? Have you arrested the soldiers who killed Sheikh Zakzaky’s three sons and 33 other innocent peaceful protesters in Kaduna the other day? Have you arrested Stella Oduah and the manager of Coscharis motors, or you claim not to know that corruption directly leads to the death of millions from poor or unavailable infrastructure, security and all other responsibilities of the government with public funds?

Nigeria is a free for all now. Please and please, do not pounce on petty thieves and petty killers. You see poor TB Joshua and you all gather to throw tire and petrol on him and mob beat him because there is something about him you never liked… you were always jealous of him and looked at him as “other.” But you have left the government of Jonathan to continue to lead this nation in reckless abandon; to promote corruption, looting and killing in all facets of the nation. To destroy every single facet of society. You have watched Jonathan promote and encourage stealing as never known before; you have watched him free killers and thieves.

Nigeria is a free for all. You have not clamored for the arrest of Goodluck Ebele Jonathan, the king crook in power, guilty of unlimited crimes against humanity and responsible for the veering of Nigeria- all systems- off the cliff finally, but you want to arrest TB Joshua. No petty criminal should ever be punished again. Open all the jails and set them free. If and until we all rise together and chase out the entire master killers and thieves in the Senate and Presidency, please and please, touch not the “anointed.” Only 100 he killed, Diezani killed another 1000 today by stealing money for the construction of their community health centers, and she is there putting make-up on in peace and you are shouting about TB Joshua.