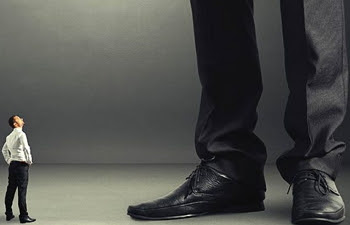 Who Is An Underdog?

An underdog is someone who is hardly noticed. Kind of the opposite of popular or the best, but not exactly the worst.

What if I were to tell you that being the underdog would give you more power than you could ever dream of. Would you think I was crazy?

Maybe so, but aren’t all geniuses? The moral of the story is that if you feel like an underdog somewhere in life, you actually have a massive competitive advantage if you play your cards right.

While others spend their lives sulking because their parents didn’t spoil them relentlessly, you know better. You know that being an underdog in life can prepare you for greatness.

Below are 3 reasons why being the little guy can actually be your winning ticket:

From David & Goliath to Donald Trump, history has shown us that being an outsider can prove to be your secret weapon. In the tale of David & Goliath, David was so much smaller that any sane person would’ve projected him to get clobbered by his gigantic opponent. That’s just physics, right?

Wrong. You see David was far smaller, but he also had one heck of a swing. So much so, that when he threw a rock at his target, Goliath was so thrown off that he couldn’t even see straight. The enemy was down for the count. In our own lives, we must remember that just because the cards may appear stacked against us, the game is not necessarily over. Don’t give up too soon. Just because you might not look like those who have succeeded in the past, realize that your unique set of capabilities could help you win in the end.

“I’m very competitive by nature. And I like to be the underdog – It’s the best way to win. To come from behind and win is a great feeling!” – Zac Efron

2. Underdogs don’t play by the rules

If weaker opponents always played by the rules of the game, they would, of course, lose a majority of the time. The competition is naturally stacked against them with a list of assets they are lacking. However, when a hypothetical long shot decides to bypass the rules, he or she unlocks more power than can be imagined.

You see, the projected winner knows what it takes to master the game. They have the tried & true skills that it takes to succeed. When an underdog is compared to these standards, he or she will always come up short. Yet, when they decide to play unconventionally, a whole new world of possibilities opens up. By forgoing the rules of the game, the dark horses of this world can spot holes in the competition.

3. Underdogs have nothing to lose

When you start from the bottom, you don’t have much to lose. While the establishment has everything to lose including their reputation, assets and power, outsiders can play by whatever means they wish. They are not held to any standard. This is power, in itself. If you’re an underdog somewhere in life, realize that this could give you power in that you’re not held to the same constraints as others who have been playing the game for years.

You don’t have to wait on anyone’s approval to get started. You don’t need to ask anyone for permission; you can instead map out plans for getting to your goal in whatever way you see fit. For instance, if you’re operating on a shoestring budget instead of pulling from a pool of money, see this as a chance to get creative and do things your own way. This could be your key to success in the end.

“The fact of being an underdog changes people in ways that we often fail to appreciate. It opens doors and creates opportunities and enlightens and permits things that might otherwise have seemed unthinkable.” – Malcolm Gladwell

To be an underdog is often to go up against the “establishment.” If you learn to spot holes in the system, you’ll undoubtedly come out victorious. While others waste time trying to master the game, underdogs see hidden opportunities.

[About the author: Jessica is the founder of Think Train, www.thinktrain.io]

Life Is Too Short To Give Up On Your Dreams! Stand Up To Your Fears & Go For Your Goals
Don’t Allow Your Disability To Hinder Your Ability