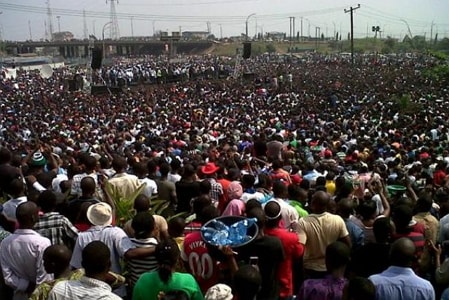 Humans in all of its history have always been on the move, and through the centuries, human beings have devised ways of moving themselves, goods and services over short and long distances. Today, countries are leveraging technology to solve transportation challenges but how far can technology go?

Putting the Sustainable Development Goals (SDGs) into context, number one (SDG 1) goal seeks to eliminate all forms of poverty by ensuring that every individual has equal opportunity, privileges and rights to create jobs and make wealth.

Poverty in Nigeria is pervasive, as the country is now the poverty capital of the world with over 87 million Nigerians living in extreme poverty; the implication thereof is that more people fall into poverty every day in Nigeria than anywhere else in the world.

With technology disrupting systems and processes, the big question is, (a) Is technology putting more people especially Nigerians out of jobs than it is providing for them? (b) Are government policies impoverishing instead of uplifting its citizens out of poverty? (c) Where is the meeting point/connection between technology, government policies and the people?

At the last count, there are over five technology based tech-transport services in the city of Abuja and Lagos (Uber, Taxify, OgaTaxi, Contrac, GoMyWay). Although some have shut-down operations for different reasons, UBER and Taxify are trailblazing in Abuja with more private individuals with clean, more recent cars taking over the transport business.

In Abuja, the Federal Capital Territory Administration, the transport secretariat regulates Licensed Taxi operators in the FCT with the sole mandate to oversee operations of passenger services operators. Most taxi drivers licensed to operate within the FCT pay registration fees and daily levies by buying daily tickets from the various agencies in charge of transportation in the FCT who make remittances to the FCTA transport secretariat and Federal Ministry of Transportation. From cursory observation, majority of these drivers are semi-literate with either basic school leaving certificates or secondary school certificates at most, with a good number of them with little or no form of formal education.

The education level and/or literacy status of these drivers puts them at a disadvantage to adopt or leverage on tech-based platforms such as UBER and TAXIFY. And simply because their cars may not even meet the required specifications of these systems, the system automatically excludes them.

Although fewer drivers compared to the licensed/professional taxi drivers use the tech-based platforms (UBER and TAXIFY), they are presently enjoying more patronage than the average passenger service operator (taxi driver) who have to compete among their contemporaries for the available passengers who still patronizes them (no wonder, these taxi drivers don’t mind causing traffic lockdown on other road users right of way to pick passengers which sometimes result to accident), as more people are now opting for the convenience the tech-serviced cars affords.

While the above is contestable (i.e. average daily earnings of an UBER driver and the conventional taxi driver), another major issue of deep concern is how government policies inadvertently puts more people out of jobs.

In Abuja, the painted taxis who are by law one of the licensed operators of intra-state transport services are prohibited from carrying passengers into most shopping plazas, government office premise, hotels, airports and some residential estates etc. This singular action either backed by law or otherwise by individuals or corporate organizations puts the ordinary taxi man at a disadvantage as no one going to a hotel, airport or shopping mall will patronize them, therefore, giving room for private individuals to pilfer jobs from the licensed operators. The sense ideally should be to encourage licensed operators to move freely within the city as one would expect that their data are captured in the FCTA transport department database and can be tracked in the event that they allow themselves or vehicles to be used for any shady or phoney deals. This would also boost public confidence in using their service.

In Premium Times of April 9, the FCTA transport secretariat issued a list of guidelines for licensed passenger service operators (commercial taxi) effective October 1 one of which is that all passenger service operators should have air conditioners installed in their cars. How many private vehicle owners in Nigeria and in the FCT today have air-conditioners installed in their cars? How many car owners use their air-conditioners in Abuja considering the cost of fuel?

In issuing this mandate, did the transport secretariat consider that if eventually all taxi drivers were to install and use their air-conditioners during passenger conveyance that the passengers would be charged more than the usual fare? Where will this extra money be sourced from by the passenger? Would a passenger who possibly survives on N18,000 minimum wage be able to afford taxi service to move around?

Did they consider the social impact this guideline will have on the taxi operators and the passengers?

Technology is great if used for the benefit of all; government policies must be consistent such that it is people centred and not capitalistic in nature. Staying within the tech-based transport ecosystem, you’ll realize that the cars specification for UBER are 2003 or newer model cars has an average cost of around N1.5million for a foreign used vehicle and approximately N1.1 million for Nigerian used. How many Nigerian youths can afford or have these huge amounts of money as savings to purchase cars and how many of our elderly citizens (taxi drivers) who sometimes are pensioners with backlog of owed pension can afford to buy cars that meet the tech-based specification?

Technology use should be people-centred and inclusive such that it accommodates different people within the strata of society.

It wouldn’t be so bad if UBER, TAXIFY and any other tech-based transport company can categorise their operations to accommodate more people on either side of the divide (drivers and passengers), because at the moment, the system is elitist and favours the rich, as the average youth depends on the rich to acquire these cars and lease to them.

To conclude: If the SDGs must be actualized; then, partnerships and complimentary actions must be adopted; no one should be excluded or put at risk of losing their source of livelihood due to insensitive, unrealistic and bad government policies or disruptive technologies.

[About the author: Bassey heads a youth-driven knowledge think -tank based in Abuja.]

Continue Reading
You may also like...
Related Topics:abject, Nigerians, poverty