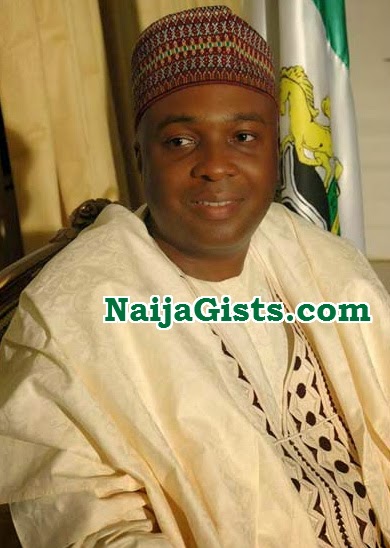 May 21, 2015 – Why Ndigbo Should Support Bukola Saraki’s Senate Presidency By Dr Frank Ojiako

This is the season Nigerians dreamt about, hankered for. The season for and of change. Change from all manner of inconsistencies too numerous to rehearse here. The spontaneity in response to this clamour for change is undeniable. Our people are still trekking for it! Those who likened the 2015 electoral tsunami to a civilian coup d’état were on point. The new down is about springing forth if we do not scuttle this God ordained political elixir by our hackneyed unconscionable attitude to critical issues, especially when it comes to painstakingly choosing our representatives.

I digress. Penultimate week, a statement was wrongly credited to our own national socio-politico-cultural barometer, the most respected Professor Wole Soyinka regarding the role Ndigbo played in the last elections. The Prof. was quoted as having said, inter alia that: “The Igbos … put their votes where their stomachs take them …”.The man was thoroughly excoriated. Many insinuated tribalism. I was, however, grossly disappointed, even pained, when the sage poo-pooed and disowned that report. I had wished he authored that release. Ndigbo, my people, deserved those hash words and worse.

But for the political hara-kiri Ndigbo wittingly committed against themselves, the office of the senate president would have effortlessly been theirs on a platter. We decided to follow our stomach. Those in charge of our stomach infrastructure conjured some indefinable recipe. Dr. Goodluck Jonathan was fostered on us as our brethren. He became Ebele (instead of Ebelemi, I hear). He became an imitation Azikiwe. For the five good years the man sat as president, not one tangible project could be pointed to in Igboland that he initiated and completed. The concoction was served steaming hot and we fell to. Today, the concocted broth has gone sour just a few weeks after the elections. Shops and business premises owned by Ndigbo in Yenegoa, Bayelsa State, Dr. Azikiwe Ebele Jonathan’s home State, are being looted, burnt down just because of a commemorative rally for Isaac Adaka Boro. Very soon their houses will become abandoned properties. Again. Hmm!

Yes, Bukola Saraki should assume the presidency of the senate. Apart from being very eminently qualified for the post on account of his erudition, exposure, razor-sharp intelligence, pedigree, experiences as a medical doctor, banker, entrepreneur, technocrat per excellence, bridge-builder, two-time governor, senator, etc., we adjudge him a completely detribalized, honest, charismatic, humble person who should occupy that seat to help engender the change we deserve.

And yes, since the number three seat should have been Ndigbo’s, it is only equitable that the senate presidency goes to someone Ndigbo are comfortable with. We are very comfortable with Bukola. And for very good reason. I am yet to see any State outside the Igbo enclave in southeastern Nigeria, where Ndigbo are fully welcome to live, breed and do their businesses without any recourse to unbridled violence against them, their families or sources of income. From inception of Kwara State in 1967 till date, there has never been a single mayhem targeted against Igbos resident in the State. It is an enviable record that immediately after the war, Kwarans’ welcomed returning Igbos and not only returned their houses with accrued rents, where applicable, but also (wait for this) gave them their homestead livestock with accompanying offspring!

This is no legend. I should know. I lived in Ilorin, after my National Youth Service, for more than 20 years. And the singular factor to this stability and love for Ndigbo is the Saraki Political Dynasty. I never knew the motive for this unbridled love for my people by kwarans until late 2002 when the only true leader of Ndigbo, His Excellency, late Dim Chukwuemeka Odumegwu Ojukwu sent a terse message that I urgently see him in his residence in Enugu. I was then deeply involved in Igbo cultural nationalism as an Igbo leader in Kwara State, political committee member of the Igbo Delegates Assembly (representing Ndigbo in the 19 northern States and Abuja), founding member of APGA and the then Kwara State Chairman (of APGA). On getting to Dim’s residence, he simply told me to go back to kwara, meet with his bosom friend, the late

Waziri of Ilorin (Rt. Hon. Senator Olusola Saraki, Bukola’s father) and to tell Ndigbo to fully cooperate with Bukola in achieving his gubernatorial mandate. The Ikemba stated that I was invited, as against telephone messaging, for me to appreciate the import of his message and the reasons behind it. Of course, I met with Oloye Saraki and passed on the message to Ndigbo in Kwara State. The cooperation was firmed with the visit of Chief Chekwas Okolie (then Chairman of APGA) and later, Barr. Maxi Okwu (incumbent APGA Chairman) in early 2003. The remaining is verifiable history.

We tell this story because we must get it right this time. We must not be seen to be following ‘stomach’ politics. All the senators and governors from Igboland, if they truly represent us, should rightly, fully and unconditionally reciprocate the Saraki dynastic gesture towards Ndigbo. Senator Bukola Saraki stands on meritorious history of dealings with Ndigbo that span more than 50 years. Bukola is not a broth concocted by political abracadabra spinners.

Bukola Saraki is Bukola Saraki. He needs no change of name to show his affinity and respect for Igbos. His record is etched in history, in our memoires. We should support him because he is capable and represents the change we need. The time is NOW.

Continue Reading
You may also like...
Related Topics:bukola saraki senate