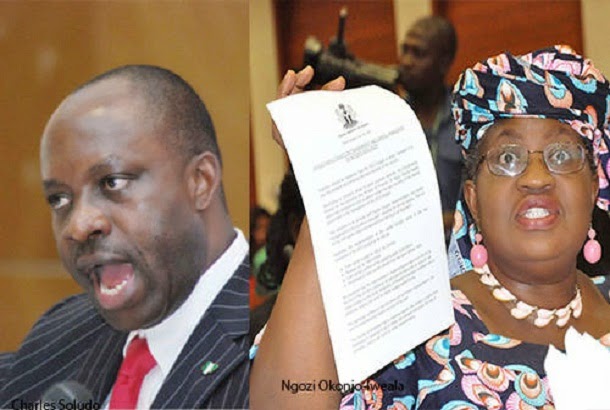 I am really saddened and deeply troubled by the turn of events over the last few days by the tone of the debate on the economy and the personalities involved. The two principal actors are people who are not just close to me, but respected internationally in the field of economics. In his latest article, Professor Chukwuma Soludo alleges that over N30 trillion is missing or stolen or unaccounted for, or simply mismanaged under Dr. Ngozi Okonjo-Iweala’s watch. Using the average dollar exchange rates since May 2011, the sum of N30 trillion is equivalent to about US$193 billion!! The trained mind will already decipher that this cannot be true, but for the sake of others, let me state clearly why such a huge amount cannot possibly be missing.

First, the assertion by Professor Soludo that on average 400,000 barrels per day are being “stolen” cannot be correct. From my vantage position as former Special Adviser to President Goodluck Jonathan on Performance Monitoring and Evaluation, I know that on several occasions, the government has made it clear that between 50,000 to 100,000 barrels per day are being lost to pipeline vandals. In fact, my recollection is that Dr. Okonjo-Iweala was the first person to sound the alarm on the missing barrels. However, the repair of the broken pipelines requires “shut-ins”, that is, the pipelines are closed down, which prevents about 400,000 barrels per day being pumped. So what is not being pumped cannot be stolen. It makes more sense to say that about 250,000 to 300,000 barrels over and above what is stolen (which is 50,000 to 100,000) by vandals cannot be pumped and sold, and this is weighing down government revenues.

Second, the claim that gross mismanagement has denied the country some $60 billion is also not true. The government has on numerous occasions given explanations as to why reserves have fallen since the 2008/09 financial crisis. Reserves, particularly the Excess Crude Account component, were used to shore up our economy when the crisis hit and please bear in mind that Dr. Ngozi Okonjo-Iweala was not Minister of Finance at this time. In the same vein, the state governors were not tolerant of the idea of excess crude savings, preferring to share monies that could have built up the reserves. The resistance has been raging from the day the concept of Excess Crude Account was initiated under President Obasanjo. In fact, there is a subsisting law suit in the Supreme Court by the governors seeking to share what is left of the Account. Surely, the Minister of Finance cannot be held liable for the behaviour of our governors. If anyone is truly convinced of gross mismanagement of our reserves, we need to show courage in our conviction by asking the State Governors to account for their respective shares of Excess Crude Account over the last 6 years. In any event, it is the CBN Governor who should account for the management of the reserves.

In this same article, Professor Soludo accused the Honourable Minister of Finance of manipulating national statistics, particularly poverty numbers. This cannot be a fair accusation from my brother. The integrity of data from the National Bureau of Statistics is now generally applauded by both international bodies as well as local institutions. It is therefore, not wise to disparage a fledgling national institution in this manner. However, for the avoidance of doubts, my simple response to that accusation is that Nigerians should read pages 16 to 18 of the “Nigerian Economic Report 2014”, published by the World Bank.

Though Professor Charles Soludo’s intellect and capacity is not in any doubt, I will strongly advise the Honourable Minister of Finance not to respond to his recent article, as the debate will lead us nowhere, and further overheat the polity. My take, is that Dr. Ngozi Okonjo-Iweala, who has received many accolades internationally for her contribution to global economic development and to Nigeria’s economic growth and stability, must not be distracted from her daily job of managing our economy through the tough times ahead.