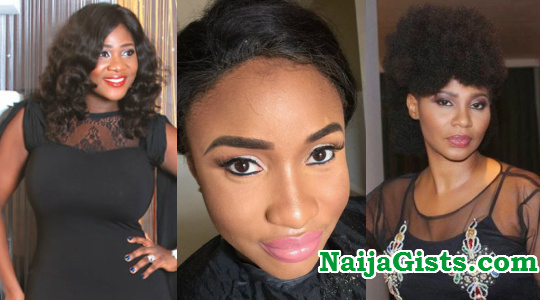 31-year-old Mercy Johnson Okojie has featured in a lot of movies. At a time, fans expressed the fear that movie makers might be over using her, an issue that made many Nollywood stars jealous because she is costing them their appeal among viewers.

The busy mother of three is somehow managing motherhood with Nollywood, which is why no company is yet to propose an endorsement deal to her.

Tonto Dikeh on the other hand has slowed down her pace. The new mother who married her sweetheart last August hasn’t featured in any movie lately.

Many would say that the fact that she never shy away from controversial issues and actions might not have made her the perfect candidate for companies that seek to run away from image problems.

Multiple award winning Nse Ikpe Etim has continued to dazzle among her peers in Nollywood, creating for herself a reputation as a great thespian that cannot be overlooked. But despite this, while the likes of Eniola Badmus, Omoni Oboli, Dakore Egbuson etc have sealed multi-million naira deals with different companies either recently or in the past, 41-year-old Nse is yet to enjoy this kind of recognition. Many would think her shy nature could be the hindrance.

Empress Njamah: I’m Not Rushing Into Marriage Because I Don’t Want To Be A Single Mother
Nollywood Actor Olaniyi Afonja Sanyeri Says Women Give Him Money To Show Appreciation