A woman in Zimbabwean recently lost her cool after her husband of many years denied her intimacy because he was fasting.

As a payback for denying her sex during a fast for their sick child, the woman allegedly grabbed her hubby’s testicles and yanked them so hard that he almost fainted.

Sexually frustrated Langelihle Moyo who couldn’t hold back her emotions repeatedly squeezed her hubby’s testicles until he collapsed and screamed for help.

Venson Masuku dragged his wife to court on the 30th of August 2017 to seek for a restraining order.

Here is what he said in court: 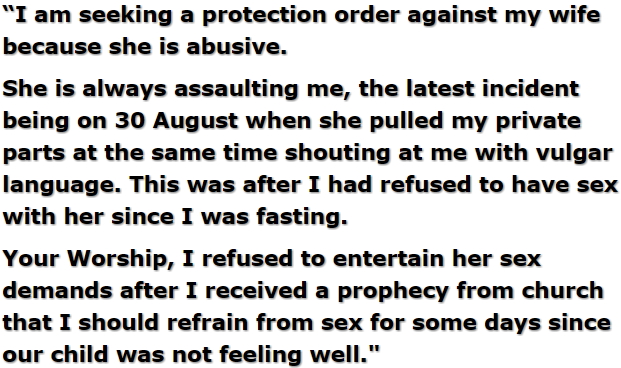 In a fit of anger she then repeatedly pulled my testicles saying she wanted to have sex with me,”

Here is how Moyo denied the allegations:

When sex is out of a marriage, issues like this are bound to happen.