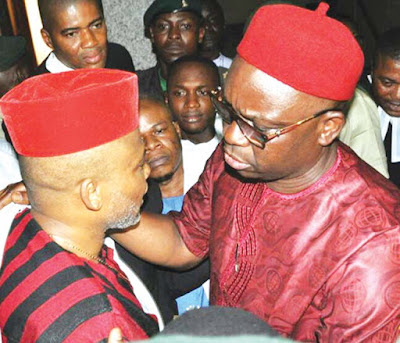 Fayose accused Buhari of bringing the full weight of military on IPOB members while Fulani herdsmen killing innocent people across the nation are left unchecked.

The controversial governor who is working hard to occupy Aso Rock in 2019 described recent army crack down on IPOB as ethnic cleansing and house arrest of IPOB leader Nnamdi Kanu as reckless abuse of human rights..

“I have said it earlier that this is beyond (Nnamdi) Kanu. That region entirely is embattled and challenged. But you know politics, time will tell.

“The herdsmen wreaking havoc all over, and killing, what has the military done to deal with them. Has anyone of the herdsmen been prosecuted let alone giving them this kind of treatment.

“You went to court to revoke Kanu’s bail but you can’t even wait for the court to take decision before occupying his house. Nigeria is in trouble except the Lord helps us. When the wicked are in authority, the people suffers, when the righteous are there, the people rejoice.

“We are in a major dilemma. Buhari coming back to power as I have said before is like returning to the dark days of the 1984 in no time, because they want to gag Nigerians they came up with law against hate speech.”

“I have said it before now that it is only God that can help the Igbo people. What I see going on the is ethnic cleansing, when you see the video clips of that occupation the behaviour of the soldiers it leaves much to be desired.”

The smart politician who has volunteered to fight for Ndigbo is guaranteed to get their votes in 2019.

Wife Attacks Husband Over Sex Denial: Drama As Fasting Husband Seeks Protecting Against Sexually Frustrated Wife
Rahama Sadau Picks Fight With Ali Nuhu For Refusing To Give Her A Role In His Latest Movie