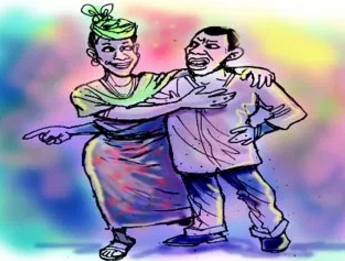 One Mr Kafayat Akinade has approached a Grade C Customary Court at Agodi, Ibadan, to seek dissolution of her 13-year-old marriage over seizure of her monthly menstrual pad by the husband.

Akinade told the court that her husband, Muideen Akinade, was in the habit of picking her menstrual pads for unknown reason.

She also accused the husband of brutality, saying he had turned her to a punching bag and a slave in her matrimonial home.

She said: “I live like a slave in my husband’s house without proper care. I shouldered the responsibility of our three children and never experienced happiness since I married him.

“I left his house seven months ago when I sensed that my life was in danger, but he did not bother to beg me to return, instead, he cursed my mother and threatened to kill me with charm.

“I pray the court to dissolve the marriage so that I can have peace of mind, the court should also order him to be responsible for the upkeep of the three kids.”

The woman threatened to kill herself if the court declines her request, adding that she had made up her mind to end the union.

In his defence, Akinade denied all the allegations, but accused the wife of adultery.

He alleged that one of his apprentices slept with the woman when he travelled.

He, however, did not agree with the dissolution of the marriage and urged the court to settle the matter.

The president of the court, Chief Mukaila Balogun, said the evidences of parties had shown that there was no more love in the union.

He dissolved the marriage and ordered the man to take custody of the first child, while the second and third children should remain with their mother.

He also directed the respondent to pay N7, 000 monthly allowance for the children up keep.