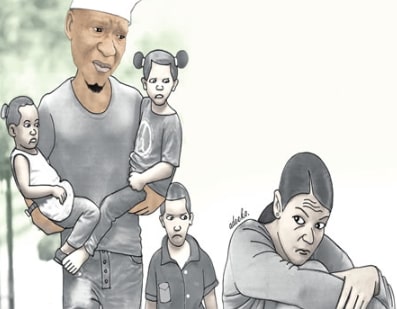 A young boy caused a mild drama at a Mapo Customary Court in Ibadan today after exposing his mother’s plan to poison his father to death.

The unnamed boy said his mom told him to put poison in his dad’s food and bathing water.

According to NAN, Adenike Ayodele, the mother of the boy, had petitioned the court to dissolve her 15-year-old marriage to her estranged husband, Adeshina, on grounds of irresponsibility and battery.

In his testimony, the boy told the court that his mother gave him a package which contained some powdery substance which she instructed him to pour in his father’s food as well as his bathing water.

“After giving me the substance, my mother warned me never to tell my father or anyone about it.”

“However, I love my father and I told him because I never wanted any bad thing to happen to him,” he said.

Earlier, Adenike, who lives at Agbaje area of Orita-challenge, Ibadan, had told the court that Adeshina had turned her into a punching bag.

“At any slight opportunity, my husband beats me.

“For 14 years, Adeshina has not stopped beating me and the last one he did was the reason why I made up my mind to quit the marriage.

“On that day, I requested for money for the upkeep of the children and Adeshina beat me so much, blood started to drip from my two ears.

“He also broke one of my legs that day and I am still experiencing the pain till today.

“Again, on December 5, 2018, Adeshina came to attack me in my shop because he was not happy that my business is doing well despite inhumane treatment.

“Then, he threatened to ruin my business by all means and what followed was the burgling of my shop two Sundays ago.

“Now, all my means of livelihood have been burgled and I got him apprehended but without any positive result,” Adenike said.

In his response, Adeshina consented to the petitioner’s request for termination of the marriage, but denied all the allegations leveled against him.

“My lord, I had on different occasions given Adenike the children’s school fees.

“Aside that, when one of our children urgently needed a surgery to be performed on him, I gave Adenike the required money for the surgery, but she spent it on herself.

“I sent her to school to acquire NCE, but she told the school management that she is a widow which means that I am nothing to her.

“If I give her money to buy anything at home, she doesn’t put my name on the receipt.

“Worst of all, Adenike told our second child to put poison in my food and bathing water, but, the child revealed the secret to me and I informed my relatives about it,” Adeshina said.

NAN reports that all the witnesses that testified corroborated Adeshina’s submissions.

The petitioner, who was unruly during the court ’s proceedings, was asked by the President of the court, Chief Ademola Odunade, to bring her parents to the court.

Odunade adjourned the case till February 27 for judgment.