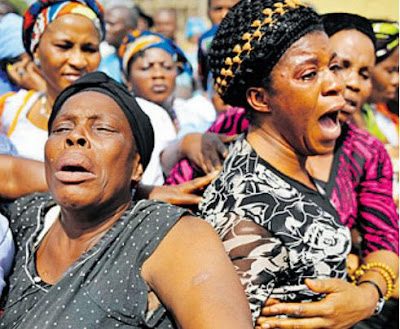 The deceased, was found lying in the pool of his blood in the early hours of Sunday with his throat slit with a sharp object

Following the incident, the New Market was closed for two days as residents fled for fear of being picked by the police.

Trouble started for the deceased, a petty trader, when he allegedly impregnated a young girl and the girl attempted to abort the pregnancy, which re­sulted in serious compli­cation.

Wife of the deceased, a patient medicine dealer, who is now on the run was said to have given the young girl some pills to abort the pregnancy. It was gathered that after taking the pills, the girl developed complication.

The girl is receiving treatment at the inten­sive care unit of the Fed­eral Teaching Hospital, Abakaliki.

It was also not clear whether the wife had a hand in the death of her husband as she has van­ished into the thin air moment after the inci­dent.

Though, the police have made some arrest, many people are still pointing accusing fingers at the fleeing wife of the deceased.