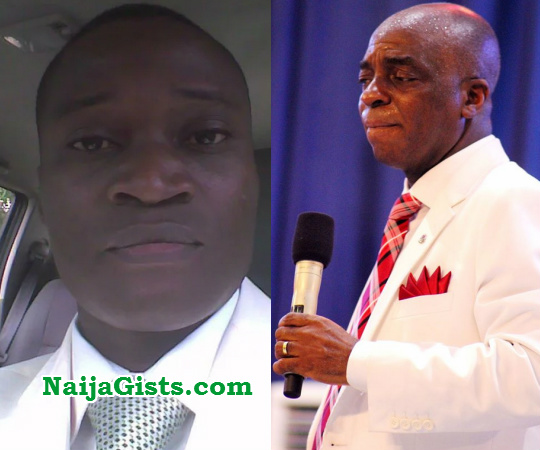 The heartless kidnappers who dragged a Living Faith Pastor, Seyi Adekunle out of a prayer meeting in Calabar few days ago have released him.

According to a new report coming from Calabar, the kidnappers got in touch with the church authorities in Calabar to demand for ransom. Oyedepo later asked to be put through to them on the phone.

Thinking he wanted to negotiate a ransom with them, the kidnappers responded to the Bishop who then confirmed if they knew who they were speaking with.

The kidnappers replied in the affirmative. It was then Bishop Oyedepo lambasted them on the phone, saying “I curse you in the name of Jesus and anyone who pays ransom to you is cursed.”

Hours after the Bishop blasted the kidnappers, they released Pastor Adekunle and fled from their hideout in the outskirt of Calabar.

The pastor has since been re-united with his family and Bishop Oyedepo went to Calabar on Sunday evening for a thanksgiving service at Living Faith Church where he said God had a hand in the rescue of Pastor Adekunle.

Yesterday during the 3rd service at Faith Tabernacle Ota,  Bishop Oyedepo told kidnappers that: “As long as I am here in Christ, your endeavours in this country are cursed.”“For all of you who continually bring sorrow to families, I curse you and your sponsors.”

The Cross River State Police Spokesman who confirmed the release of Pastor Seyi Adekunle said 2 of the kidnappers have been arrested.