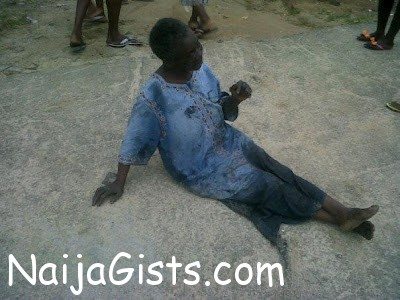 This one-of-a-kind spiritual mishap happened at about 4:00am on Saturday morning in front of a house behind one Redeemed Christian Church Of God in Eagle Island, Port Harcourt, Rivers State, Nigeria. naijagists.com

The woman in the above picture allegedly fell from the sky in front of the aforementioned house during an all-night prayer night vigil.

According to an eye witness of this spiritual mishap, when she was noticed, people were so scared and nobody could move near her.

A lady that sent us the email claimed she might be a witch flying as bird probably coming from witches meeting.

She further claimed the power of God at the spot overpowered her.

We learnt she remained helpless on the same spot for hours till daylight.

Evil is real but the power of the Almighty God is even more real!