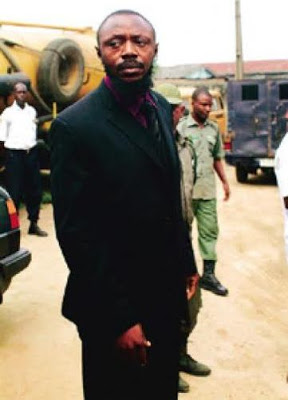 The church members of controversial cleric Chukwuemeka Ezeugo aka Rev King have attributed the death sentence hanging over him to the handiwork of witches and wizards.

They also reaffirmed their belief that King’s life will be spared.

One of his assistant pastors, Ifeanyi King in his preaching yesterday said:

“Our G.O. (General Overseer) the most holiness, Rev King, is coming back. He said he would come back and we believe the words of his mouth. We believe his report that he is coming back. Everything happening now we know is the handiwork of witches and wizard. Soon a new story will emerge.”

“Whether people realise it or not, everybody now knows his holiness, our G.O. Rev King. The front pages of newspapers are flooded with his name. People are yearning to read about him in the social media. I can confirm to you that by all these, a lot of people have become endeared to him. Our Daddy G.O. shall live forever for us in Jesus name.”

The self acclaimed prophet set one of his church members on fire in 2006 and was sentenced to death last week after over 8 years of trial.

Those who have visited the church claim that any disobedience act is usually rewarded with beating.

For instance, if they order everybody to stand up for prayer, those seating down will be whipped by the ushers.

Continue Reading
You may also like...
Related Topics:rev king death sentence, when will rev king be hanged