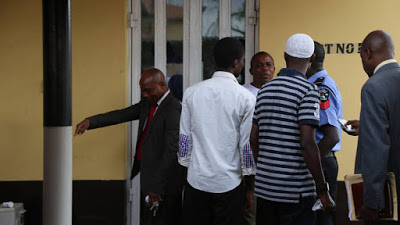 May 11, 2017 – Witness Vomits Blood & Dies At Ikeja High Court While Testifying In A Land Dispute Case

A land dispute case took a spiritual turn today at an Ikeja High Court after an unidentified witness gave up the ghost as he was about to testify in court.

According to eyewitnesses, shortly before the case came up for trial, the deceased had been coughing and gasping for breath.

When his name was called in court, the deceased had already slumped at the corridors of the courtroom after he vomited lots of blood.

His lawyer informed the presiding judge Justice O.A Olayinka about the death of the witness before the proceedings was stopped.

The court room was thrown into confusion when a medical team came in to take the lifeless body of deceased to the morgue.

However due to fear of meningitis, none of the cleaning staff of the court cleaned the clots of blood seen all over the corridors of the courtroom.

As at the time of this report, blood clots were seen all over the corridor of the deserted court room.