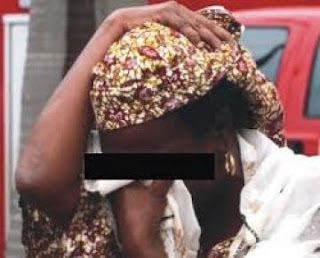 May 24, 2012 – Woman Cuts Husband’s Manhood Claiming He Demands Too Much Sex

Janet Uduak, a 28-year old housewife has been dragged to a Lagos customary court for allegedly cutting his husband’s manhood with a kitchen knife when he made an attempted to sleep with her.

She claims her husband demands too much sex.

The mother of one of one did what she did because her legal husband demanded sex against her wish.

This terrible incident that happened at 19, Jagun Street, Okokomaiko, on the  outskirts of Lagos, got his husband, Richard seriously injured, causing him to lose  his ability to have erection.

Richard is asking the Ijanikin Customary Court to dissolve his marriage with Janet.

He alleged that Janet was violent and does not perform her matrimonial obligations, which include allowing him to have sex with her.

He told the court that he paid N50,000 bride price on Janet at her  her village in Akwa Ibom State. He said despite marrying her legally,  Janet never allows any sexual intimacy between them.

“There is usually trouble in the bedroom anytime I wanted to sleep with her,” he said.

Richard, a teacher, from Ondo State, told the court that he is no longer in love with her.

He tendered a photograph of his severed manhood before the court. He  also asked the court to grant him the custody of their only daughter.

According to the Nation report, Janet Uduak has however asked for forgiveness, promising that she  will fulfill her obligations as a wife including allowing him to have sex any time he wanted. But Richard insisted that the marriage should be dissolved.

The President of the court, Mr. S. K. Hussain, noted that the relationship has completely broken down.

He consequently dissolved the marriage and ordered Richard to pay Janet N26,000 as alimony.