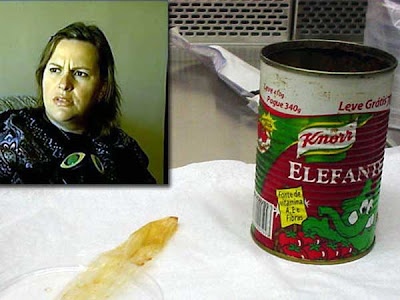 A woman named Cintia Mayerle got the most bizarre shock of her life recently when she discovered a used condom in a tomato paste she used in cooking her family dinner.

One evening, Cintia Mayerle and the members of her family had already eaten the meal she prepared with the paste when she suddenly discovered a rubber condom while she poured the rest in a storage bowl.

The following day, Cintia Mayerle took the tin of Knorr tomato paste to a local university for further analysis.

Mrs Cintia Mayerle was awarded the total sum of £1,110 for the moral damages she suffered.

Unilever has been fined £3,100 as a result of this discovery.

How on earth did a used condom get into the tomato paste? That remains a misery.

This world is full of wonders!