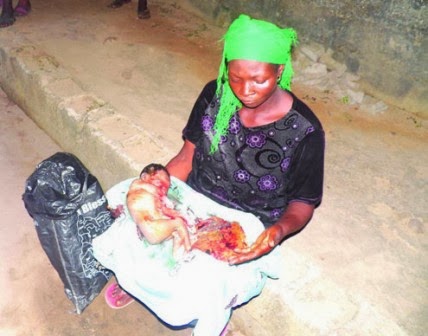 The joy of every expectant mother, a newly born baby has died in the hand of his mother in Lagos State Nigeria.

On Wednesday, a widow identified as Mujidat was caught with a dead newborn baby inside a sack.

According to the community member, the 40-year-old mother of 7 was caught while trying to get rid of the dead baby around 5pm on the aforementioned date.

According to the community high chief, Mr Babatunde Balogun, when Mujidat was queried about the content of the sack, she claimed she was coming from the market where she went to buy some food.

After close examination, a dead newborn baby was found in the sack. Chief Balogun immediately called the attention of the local residents.

According to Mujidat’s neighbour, her husband known as Baba Mushin died about 3 years ago and since then, several men have been seen visiting her residence, the house built by her late husband.

When asked if she planned to throw away the baby because of an alleged paternity mess, she denied, claiming that a welder turned block maker near her residence was responsible for the pregnancy that resulted in the birth of the dead baby she was caught with.

Mujidat claims she delivered the baby herself because she found it easy and therefore did not go to any hospital or sought anybody’s help.

Her case has been transferred to a local police station in Isheri Osun area of Lagos.

Police officials are still unsure if she killed the baby.

Mujidat’s case is under investigation.

May the soul of the innocent baby rest in peace.