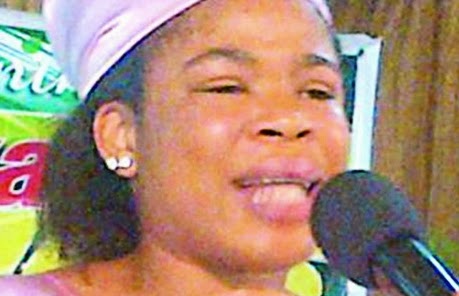 The background of her story is almost common place, but her story itself, is rare and chilling. It is a story of the ritual killing. It is not always that captives of ritual killers live to tell their tale; a recount of their sordid, surreal experience. Those who have the very rare luck of escape are few and far between.

Ozioma Ebere chukwu is one of such extraordinarily fortunate few. Few days to the last Christmas in Alaba area of Lagos, she was abducted by two men who approached her from behind and covered her nose with handkerchief. She lost consciousness. The rest of her encounter in what turned out to be ritualists’ killing court, was a journey into weirdom. Ozioma, an undergraduate of Abia State University, recounted the weird experience and EME-KA ANOKWURU was there to record it.

This is her story, as she told it herself: Sometimes I go to my uncle’s shop at Alaba International market to help out when I’m chanced. On Wednesday, October 23, 2013 I went to the shop as usual. I was pressed so I went to the toilet to ease myself. As I was returning to the shop, two men came behind me. They brought out a white handkerchief and placed it on my nose and I lost my senses. I did not know what happened after that or where they took me to. Later, I found myself in one big house. In that massive com-pound, I saw five people there including a pregnant woman. She appeared weak and looked forlorn. There were two very tall, huge men there too. They looked like bouncers. They came and quickly undressed us. Then they rubbed some oily substances on us that made our body shine. It was smelling like Olive oil. Then they began to beat us mercilessly as if we had stolen. They forced us to eat rice, beans and fried plantain. They gave us something to drink, I know it was liquid but I can’t say exactly what type of soft drink except for the colour. It was pinkish. Then, they asked us to line-up. Before then they asked for our names. I refused to tell them my name.

They said ‘this girl, you are too wicked and stubborn.’ They called me wicked and heartless girl and beat me up seriously. They ordered me to stand beside one of the huge men. There was a tall mirror by his side. As they call your name, you match forward. They will remove the scarf over your eyes for you to see the butcher as he was killing people. Within few seconds he will cut off some-body’s head and blood will gush out from the head like a fountain; the blood will rush up and then down on the dead body before reaching the flood. But instead of allowing the blood to waste, one of them brought a bowl to collect it as it oozes from the severed neck. One of the men then tilted the victim’s neck towards the container to ensure that not even a drop of blood was wasted. In that building is a deep well where they throw corpses. As we watched, the butchers killed two people, a boy and a girl. Then the third was a pregnant woman, while the fourth and fifth were men.

I was number six and the second girl. When it was my turn. They called my name and I stepped out naked. Immediately, I developed goose pimples and I said ‘God, is this how I will end up?’ I was really scared. In fact, I was more dead than alive. In short, I came face to face with death. Suddenly one of the butchers shouted: “Who brought this girl here?” He was very angry. Then he said: “Come and take her away to the place you brought her from before she spoils things here.” Immediately one of them came to me and said, “Ozioma, come.” He brought my clothes, my pant and brassiere, and dressed me up because I was too weak.

He just led me out of the place into the darkness. All this time I could not speak, but I heard everything they were saying; I also saw what they were doing. That was how one of them took me out of their den and dumped me along the road. I didn’t know where I was, whether it was Lagos or elsewhere. I was very tired, I just lay by the side of the road. When I saw motorists I managed to wave, but they didn’t bother to answer until when one kind man came. The man saw how I was waving and came to me. I could not talk so he gave a pen and I wrote my parents’ address at Isashi near Okokomaiko. When he read the note he told me I was at Iyana Ipaja, Alimosho Local Government Area.

He took me to the motor park and paid the conductor and told him to drop me at Iyana School, where I came down. When I got to Iyana School, another man also came to my help like the first person. He also paid my fare to my home. I could not enter our house. It was while I was crawling towards our house that my mum and siblings saw me. I was still seeing the ritualists in my subconscious. They wore red and black clothes. I saw a snake and a baby. Then my mum came out. I think at this time, I started to wave good-bye to her. I was hearing the ritualists calling me to come. So I started crying that I want to go, I want to go; that I want to die. Then my family began to pray. I could hear them, but I was too weak to say or do anything reasonable.

My mum told me later that that was when she phoned Prophet Lenke (of Liberation Embassy, Agboju) to come. According to her, this was around 11 pm, 24 hours after I disappeared from Alaba International Market. Prophet Lenke’s account: When her mum called me, she said I must reach their house at Isashi in less than one hour, from my Festac residence, otherwise her daughter would die. The time was 11.30 pm. So, I told my wife I was going to Isashi for an emergency.

Then God told me ‘if you don’t hurry up be ready to bury her.’ So I gave my phones to my junior assistant, Elvis, to answer their calls because they kept calling to feed me with what was happening. I went with the jeep. We drove like madmen through Barracks and hit Isashi in less than 40 minutes. As soon as I got there, God told me there was a snake in her stomach. It entered through the meals they had while waiting to be slaughtered. Because she was set free, the snake that was projected from the ritualists’ kingdom was to kill her, and stop her from revealing their identity. That was why she was dumb all through. Ozioma’s mum speaks: When her uncle called around 7 pm to say that Ozioma had not come back to the shop since after-noon that day and asked if she was with me, I replied, no. He said she went out with all the money they made that day. I yelled at my brother to produce my daughter not to talk about money. But by evening when I found out that my daughter was truly missing, I was confused. I always advice my children to close from business by 5 pm any day they go to Alaba Market. Quickly, I called Papa, Fire Lenke.

He told me that my daughter was alive but under a strong hand. He said, by 9 am tomorrow, she will return. I believed him partially. I asked myself, what type of strong hand? I kept calling the man of God to seek further information. That night I couldn’t sleep. I sat in front of the television till 3 am. When I called him again and he told me that she would be back, I retired to bed but could not sleep till morning. I didn’t tell my husband my interactions with Prophet Lenke. In the morning, we went into marathon prayers. When we finished prayers, I told one of my triplets to go and empty the dustbin. About 6:20 am we saw some body staggering towards our door, and we all rushed out to see who it was. Behold it was my daughter. Quickly I called Prophet Lenke and told him that my daughter had returned home as he prophesied.

He told me to put my handset near her ear and he prayed for her. I told her to have some rest before going to bathe, but she kept quiet. She was weak. I carried her into the bathroom and gave her a hot bath. Yet she remained restless and kept muttering things I didn’t understand. It was when the pastor now prayed for her that she came to herself.” However, one of the things Ozioma could remember of her bizarre encounter in the coven of the ritualists was that she noticed people coming to the place to buy human parts.