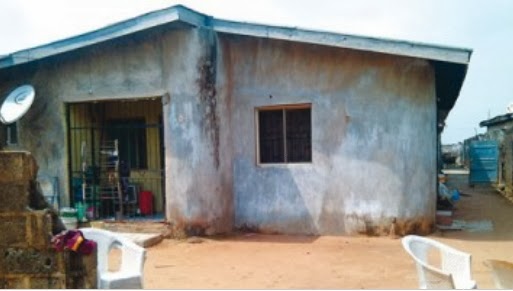 This is a very sad story. A new mother has found herself in trouble after she accidentally stabbed her “trouble maker” husband to death over a food related argument.

Our men have to keep in mind that anger management and control is very important in any relationship. If you can’t control your anger, please put marriage aside for now.

And for women, please be careful to watch out for key signs of violence in the guy you’re dating and don’t marry a violent or abusive man.

If you mistakenly married an abusive man, learn to respond to him when he is angry and if you can’t handle the situation, pack your things and leave the house because a broken marriage is better than a wasted life.

To cut the long story short, a nursing mother has been arrested for her inability to control her anger. 33-year-old Biola Gbadamosi, the mother of a 3-month-old baby has been arrested after killing her husband in anger.

Biola murdered her hubby, one Mr Jamiu at their rented house in Ikorodu area of Lagos State on the 7th of September 2013.

According to police report, angry Biola stabbed her husband with a kitchen knife during an argument over Fried rice.

Police noted that Jamiu, a Vehicle Inspection Officer had history of domestic violence before his death.

“Jamiu and I dated for four years, but when I got pregnant this year, we did introduction and I started living with him in Idi Iroko, Ikorodu. However, when I was three months pregnant, he started beating me. “Most times, he takes alcoholic drink and he comes back home drunk and starts beating me for flimsy reasons. He even had a kidney ailment.

“One day, he came home drunk, accused me of infidelity and started beating me. He said he had been told that I was going to poison his food, but I continued to endure. I, however, reported the beatings to his mother and siblings.”

The suspect said after being delivered of a baby in August, she usually went to her family’s house in Somolu from where she would take her baby for post-natal.

“While I was about leaving my parents’ home on September 7, 2013, my husband called to say that he was broke and I should make money available for the weekend. When I got home, I started cooking fried rice but my husband, who was drunk, said he did not like it. I jokingly called him a bush man and an argument ensued.

“While we were arguing, a neighbour, who sells drinks, came into our flat to collect money that we owed her. I was grating carrots with a knife when my husband slapped me and said I must leave his house that night.

“I used the knife I was holding to strike him on the thigh and he started bleeding profusely. The neigbours and I took him to a hospital. At the hospital, I was told that my husband’s injury was not deep, so neighbours said I should take my baby home.”

The next morning, she was told that her husband has passed away at midnight.

She was promptly arrested by officials from Owutu Police station after the case was reported.

The 33-year-old OND degree holder from Ibadan Poly insisted she killed her husband by mistake. She pleaded for mercy for the sake of her baby.

“My little baby, Oluwaseyifunmi, is with my husband’s family and I fear that my child will never get to know me if I am sent to prison. My breasts are still filled with milk and no baby to suckle them.”

What a big mistake!