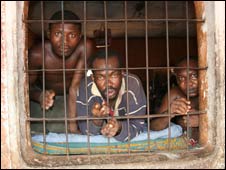 A housewife, Mrs. Roseline Ibrahim, betrayed her husband, Yahaya Ibrahim, and ran away after he stood surety for her at a police station in Lagos State, Southwest Nigeria.

The 39-year old Yahaya has been confined to prison custody in Kirikiri, Apapa, Lagos after Roseline escaped from facing criminal charge for an offence she allegedly committed.

She also switched off her phone, leaving her husband to face his fate.

Yahaya wept bitterly wile facing the charge and said in the open court that his wife and mother of five children told him that since he has no money to settle her case of assault, it was better for him to go to jail while she stays behind to take care of their children.

“She took our children and ran away and since then I cannot find her or the children and the police have been on my neck to produce her,’’ he lamented

The police arrested Yahaya after he failed to produce Roseline to be prosecuted for assault.

He had signed a N400,000 bond to produce her when the police needed her.

Yahaya hails from Kogi State and married Roseline from Edo State and they were living peacefully until his business crumbled.

Roseline was alleged to have gone to a saloon in their area to make her hair. Trouble ensued and she allegedly stabbed the owner with a bottle.

The matter was reported the police and Roseline was arrested and taken to the police station. At the station, both parties agreed to settle on condition that the woman will pay N8,000 for the victim’s treatment. Her husband took her on bail.

When they did not bring the money for the treatment, the police asked the man to produce his wife but Yahaya could not do so.

The woman, sensing that the police will charge her to court and she could end up in prison, bolted away with her children, leaving her husband to his fate.

He was arrested and charged to Ejigbo Magistrate’s court for failing to produce the suspect and was asked to forfeit the bond money to the Federal Government as required by law.

He broke down in tears and pleaded not guilty. He told the court that his wife ran away. The presiding Magistrate, Mrs. M. B. Folami granted him bail in the sum of N100,000 with one surety in like sum.