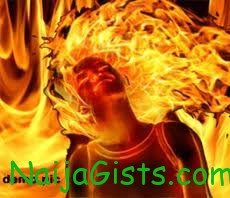 A man identified as Ikechukwu Godwin has been arrested and is currently being detained at the State Criminal Investigation Department, SCID, Panti, Yaba, Lagos, southwest Nigeria, for allegedly setting his neighbour, Roselyn Oluseye ablaze.

The incident happened at 11, Abati Street, Akowonjo, in Alimosho Local Government Area of the state and was reported at the Afonka Police Station, Akowonjo.

According to eyewitnesses,  trouble started when Godwin allegedly brought out some dirt from his apartment to burn in front of their house, some meters away from Roselyn’s kiosk. It was gathered that the mother of four did not like it and confronted Godwin.

Speaking with our correspondent on her hospital bed, the petty trader said that an arguement ensued between the two of them when she was trying to prevent him from burning the dirt close to her kiosk.

She alleged that Godwin later dashed into his apartment and emerged with petrol and allegedly poured it on her while she tried to put out the fire.

“At no time did I have any quarrel with the him before that day. That was his fourth time of coming to the front of my shop to burn things. On those occasions, the smoke from the fire had always affected the clothes I sell there and I was bent on stopping him this time.

“Anytime he came to burn his dirt in front of my shop, I reported the matter to some elders in the neighbourhood since my husband would not hear that I equarrelled with any neighbour. I was shocked that he would pour petrol on my body just because I was trying to put out the fire he set in front of my kiosk,” Roselyn while while groaning in pains.

Speaking about the incident, Roselyn’s husband, Alausa Oluseye alleged that that was not the first time Godwin would come right in front of his wife’s shop to burn his dirt, adding that she often challenged him because she suffers from asthma.

“The smoke would not only damage her wares in the shop but her health too. I even heard that he beat my wife before he was prevailed upon by neighbours,” he said.

According to Chibuzor, Godwin’s brother, “you know that water and fire are not the best of friends. Ikechuwkwu did not pour petrol on her body, but the woman poured water on the fire and that was how the fire escalated, causing her bodily damage.”

Continue Reading
You may also like...
Related Topics:lagos, neighbour, woman on fire