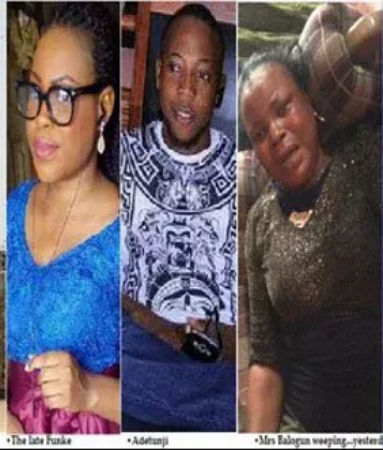 A student at Yabatech in Lagos, Funke Balogun reportedly died of electrocution on her birthday at an undisclosed hotel in Oshodi Lagos.

24-year-old Funke a mother of one was said to have lodged in her boyfriend’s mother’s newly commissioned hotel before she met her untimely death.

The incident we learnt happened on Balogun Street in Oshodi last Thursday, the same day the deceased clocked 24.

Her younger sister, Funmi, said Abolade came to pick her sister at their residence on Saturday around 11pm, adding that was the last she saw of her.

The bereaved mother, Mrs Kehinde Balogun, said she still spoke with her daughter on Sunday morning.

She said:”Funke was my first child and she has a three-year-old son. The only reason they live alone is because her school is close to the family house in Oshodi. Why did they kill my beauty? Why? What have I done to deserve this? I wish she listened to her sister that night because she had a dream. I saw my daughter in my sleep this morning telling me she had returned. It is unfortunate. I wish it was a reality. It is a big tragedy because where she died was three houses from where I gave birth to her. I warned her about him but she told me he was okay and assured me everything was fine.”

Some family members claimed that the late Funke’s skin was still fresh when they visited the mortuary, adding that there was no sign of electrocution except for her swollen right arm.

The family members of the deceased believe she was murdered by her boyfriend.