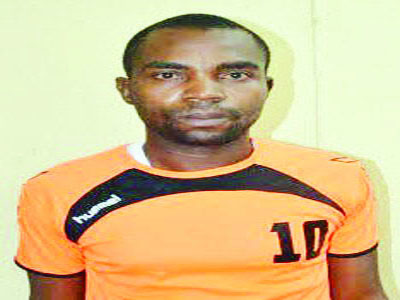 The NDLEA has arrested Maxwell Obumneme Ikeh at the Murtala Mohammed International Airport (MMIA) in Ikeja, Lagos, with substances that tested positive for cocaine inserted in his anus.

The suspect was coming from Brazil with drugs packed in six wraps weighing 120 grammes inserted into his anus.

Another suspect, Tochukwu Akumma Nwakpo, was also arrested while trying to export a consignment containing 1.860kg of methamphetamine sealed in tin tomato paste to South Africa

He said: “Intelligence report received by the agency indicated that the suspects specifically targeted the festive season to smuggle their drugs. Ikeh was caught on arrival while Nwakpo that hid methamphetamine in tomato paste meant for export to South Africa was equally arrested.

Ikeh said this was his first time of dealing in drugs, adding:

“I am married with a child and live in Lagos. I sell children diapers and clothes but travelled to Brazil two months ago expecting to buy my goods at a cheaper price. In the process, I decided to smuggle 120 grammes of cocaine for monetary gains. I inserted six wraps of the drugs into my anus yet it was detected and that was how I was arrested. This is my first time.” Nwakpo, 27, an automobile parts dealer at Ladipo Market in Mushin, Lagos, said he was only assisting a friend to send a consignment of foodstuff to South Africa.

“I sell motor parts at Ladipo market. My friend in South Africa asked me to send a luggage to him. He called somebody in Lagos who brought the bag to me and I took it to the airport for shipment. During search, the drug was detected and I was arrested,” he said.